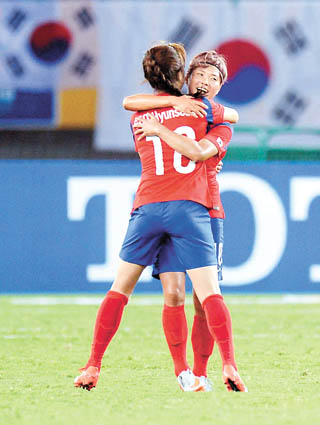 With the final match remaining on Saturday, it’s no mystery what the women’s football team needs to do to win the EAFF East Asian Cup in Wuhan, China.

One last victory will seal the deal, but it won’t be easy: the Taegeuk Ladies will have to overcome old foe North Korea.

Under the four-nation round-robin format, both Koreas now have two wins, but the North currently tops the standings by a goal differential. North Korea defeated Japan 4-2 in its first match on Sunday, while South Korea beat China 1-0 in the first round.

If South Korea wins on Saturday, it will take its second-ever EAFF East Asian Cup title. But the record shows it won’t be easy.

Ranked No. 17 in FIFA rankings, the Taegeuk Ladies have won only once against the eighth-ranked North in their last 15 encounters, along with one draw. From 2006, it has lost eight straight matches.

The South’s only victory came in the 2005 EAFF East Asian Cup. Back then, the South beat the North 1-0 and eventually won the title.

“I want us to remain in history,” said Jeon Ga-eul. “I think both we and North Korea will run over the pitch vigorously. In the end, the team with the stronger mentality will win.”

For some players, it’s revenge for the defeat in the Asian Games last year. In Incheon, the South was beaten 2-1 by the North in the semi finals and settled for the bronze medal.

“Against North Korea, we oftentimes lost despite scoring first,” said defender Kim Do-yeon. “In the Asian Games, we thought we’d win if we went into overtime, but we lost. We will seek revenge this time.”

“We have about three days left and our focus is to get enough rest to pull up our stamina,” he said.

Meanwhile, midfielder Kwon Hah-nul can have her 100th match if she plays on Saturday against the North. The 27-year-old will become the first Korean female footballer to reach that milestone.