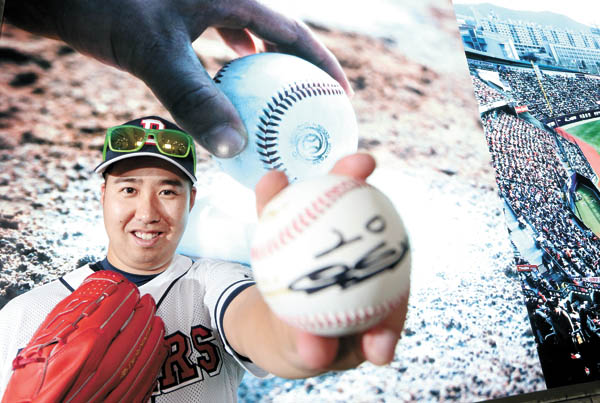 Doosan Bears pitcher Yoo Hee-kwan holds a baseball with his autograph and the number 20, wishing to collect 20 wins in the Korea Baseball Organization League. He is currently the league leader in wins at 14. By Cho Moon-gyu

At Jamsil Baseball Stadium in Seoul on Tuesday, Doosan Bears pitcher Yoo Hee-kwan shut out the Lotte Giants for eight innings with nine strike outs and collected his 14th win of the season.

Yoo also set the Bears franchise record for most wins collected by a left-handed Korean pitcher in a single season, beating Yoon Suk-hwan’s record in 1988. The All-Star pitcher is now 14-3 with a 3.25 ERA.

Yoo has been known for his “beautifully slow” pitches. His quickest fastball clocks 133 kilometers per hour (83 miles per hour), which is slower than the speed of most normal power pitchers’ breaking balls. His slow curve is only about 74 kilometers per hour.

However, his pitches didn’t always shine. When he was with Jangchung High School, Yoo was a promising pitcher - but not promising enough to be signed by a professional club.

He went on to Chung-Ang University and collected 18 wins in four years to make a name for himself in the college baseball scene. But it wasn’t enough to earn him the top pick in the 2009 draft; he watched pitchers with powerful fastballs get picked ahead of him.

However, Yoo has overcome his disadvantages with good control and slick combinations that shake batters’ timing. Some fans now expect he can be the first local pitcher with 20 wins in a single season, after Chung Min-tae did so in 1999.

But in an interview with the JoongAng Ilbo, an affiliate of the Korea JoongAng Daily, last week, Yoo said with a laugh, “I won’t get 20 wins even if I could, because then fans would just want more from me.”

Q. Was your fastball slow from the beginning?

A. When I was young, I didn’t know my fastball was slow. I realized it when I went to high school. To increase the ball speed, I tried to gain weight and work out, but it didn’t happen. So I decided to let go of my disadvantages and try to reinforce my advantages, one of which is my ball control. When I play catch with my teammates, I ask the catcher to move his glove while I try to hit it exactly. Other pitchers don’t take something as simple as catch that seriously, but I use it to become the most accurate I can be.

Did you think you would succeed in the pros?

No. I think I’m a man of luck. I could have just stayed in the minors and been released. But on May 4, 2013, I got the chance to start against our rival, the LG Twins, after Dustin Nippert was injured. Many people questioned why I started. That day, I felt at ease but still led us to a win. Looking back, Nippert is savior.

Your fastball seems to have gotten slower than before

As I pitch slower, batters can’t nail down the timing, so I deliberately pitch even slower. In addition, in summer, you get physically tired easily, so I’m controlling my power. When there are runners on base, I pitch hard, but when there are no runners, I pitch with little power. Since opponents are also analyzing me, I try to make changes continuously.

What do you do in order to cover up your slow fastball?

I study how to mix up different types of balls with my catcher. In the game, I completely follow the catcher’s signs. The key is how connected you are with the catcher. Interestingly, if I don’t follow his sign and pitch as I want, batters always get a hit. I don’t try to use my brain much on the mound because when you try to become too smart, you fall into your own trap. On the mound, pitching with confidence is more important. Some other players now tell me that I look like a pitcher who has a 150-kilometer per hour fastball.

What’s the secret to shaking up batters’ timing?

Yang has good fastball speed, while Kim has a good slider. I’m a southpaw, but I’m weak to lefty batters, so I envy Kim’s slider. I know I can have their strengths, but it’s also fair that I have something they don’t have.

You were a special commentator on the July 17 Futures All-Star Game.

I like to talk. When I went on school trips, I was the guy who took charge of the entertainment. I was concerned when I was commenting on the Futures All-Star Game because I didn’t prepare much. But thinking back to my stints in the minors, I tried to mention each player’s name at least once. After I retire, I want to work as commentator, but people say to me that I will play baseball for long time. Since I haven’t been severely injured and have good control, I think I can play even in my 40s, just like Song Jin-woo and Son Min-han did.

You still don’t have a driver’s license.

In the past, I took the subway, but now, as many people recognize me, I take taxis. It’s nice not to have a car when you’ve been drinking - your name will never appear in the newspaper for driving drunk (laughs).

You seem to get along well with people.

I don’t have great looks, but I know ladies these days like men who are funny and bright. I don’t have a girlfriend. My ideal girl would be a person who is easygoing and cheerful. To pick one, I like the characteristics of [K-pop group Sistar’s] Hyolin. A woman who is coy with a pure and innocent image is not my type.

Is is true that you won a shooting contest against national team guard Kim Sun-hyung when you were at Chung-Ang University?

That’s right. When I was young, I wanted to be a basketball player. I always won when I played against Sun-hyung. Back then, my nickname was the “kid who is good at everything except baseball.” I’m also good at football, bowling and table tennis.