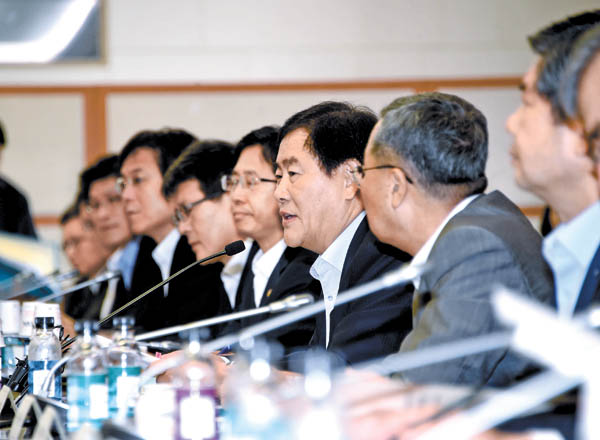 Deputy Prime Minister and Minister of Strategy and Finance Choi Kyung-hwan, second from right, discusses with CEOs of major public enterprises and related ministers about implementing the peak wage system at a meeting on Wednesday held at the Central Government Complex in central Seoul. Provided by the ministry

The government asked public organizations to work harder to implement the peak wage system by end of August, as few have been able to reach the labor management agreements necessary to make it possible.

To encourage the public sector, the Ministry of Strategy and Finance promised to provide a subsidy of 5.4 million won ($4,611) per new hire for the first two years of the system’s implementation.

The Finance Ministry said it had allocated 12.3 billion won from the July’s supplementary budget to help the public sector cover costs .

“The coming few years will be like an ice age for youth employment,” said Deputy Prime Minister and Finance Minister Choi Kyung-hwan at a meeting on Wednesday with the CEOs of major public companies and organizations. “That is why the peak wage system is a must, not a choice anymore.

“I hope labor understands the significance of the peak wage system in creating jobs for young people and cooperates with such initiatives,” Choi added.

The meeting was called by the Finance Ministry to check on public companies’ negotiations with their unions and to push them to expedite the implementation of the system.

The Finance Ministry first recommended the implementation of the system in early May, and 101 organizations have since proposed their own peak wage system. Fifty-five organizations are still negotiating with unions, and the rest have concluded negotiations and are in the process of finalizing their system.

The other 215 organizations are still preparing to propose their own system.

At the meeting, the nation’s largest public company, Korea Electric Power Corporation (Kepco), promised it will provide financial and training assistance to its small suppliers to hire a total of 600 full-time employees over the next two years. Interns at some 112 Kepco suppliers will receive training at Kepco and return officially hired as full-time workers.

Kepco also said it plans to hire 1,100 interns annually over the next two years, who will eventually be hired as full-time employees. This is an increase from the current 700.

If all 316 organizations implement the peak wage system, the Finance Ministry expects to see nearly 8,000 new jobs created by 2017.