Arnold Scaasi, designer to the stars, dies at 85

Arnold Scaasi, designer to the stars, dies at 85 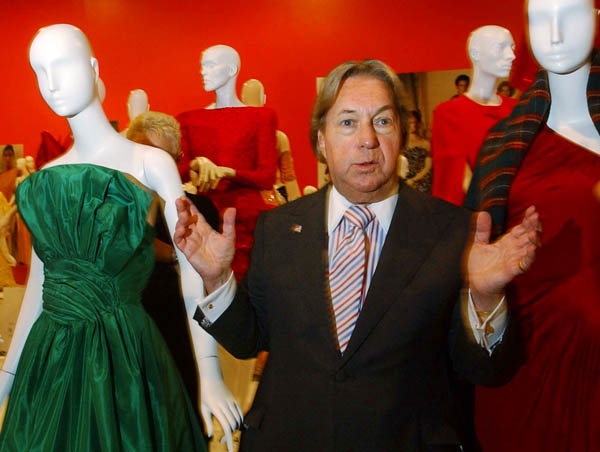 In this Oct. 10, 2002, file photo, fashion designer Arnold Scaasi talks about his designs at the Fashion Institute of Technology in New York. Scaasi died Tuesday. He was 85. [AP/NEWSIS]

Until he closed his dress business in 2010, Scaasi - his surname, Isaacs, spelled backwards - specialized in made-to-order clothes, favoring ornate, brilliantly hued fabrics and trimmings like beads and feathers.

“Fashion, it’s really about feeling good,’’ he told The Associated Press in 2002, when the Museum at the Fashion Institute of Technology (FIT) exhibited his works. “It should be fun to get dressed. I like exciting and pretty clothes that help women feel exciting and pretty.’’

While “less is more’’ was usually not his credo, perhaps Scaasi’s best known outfit was a famously translucent pantsuit worn by Streisand in 1969 to accept the Best Actress Oscar for “Funny Girl’’ (she tied with Katharine Hepburn for the award). It featured bell-bottom pants and a matching top in spangly black lace, with a white collar and cuffs.

Strategically placed patch pockets covered her breasts, but the effect of the thin fabric in bright light created the impression of nudity from some angles. Scaasi denied the intent was to shock, saying only what he told Streisand: “We have to do something very modern - really of today’’ - since to that point, moviegoers had seen her only in costumes from another era.

Scaasi’s most important legacy will be that of “his profound individuality,’’ Parker Ladd, the designer’s husband since 2011 and his partner of 54 years, said in a telephone interview Tuesday.

“Everyone who committed to his clothes will feel that way, and museums and history will remember him that way,’’ Ladd said.

Valerie Steele, director of the FIT museum, worked on the Scaasi exhibit and recalled the designer as “an amazing individual, so inimitable - very funny and witty, a real personality.’’ She called his designs “colorful, feminine and sculptural.’’

Scaasi was born in 1930 in Montreal. His father was a furrier, and he became interested in art and fashion at an early age.

He trained both in Montreal and Paris and worked for designer Charles James - famed for his glamorous, sculptural gowns - in New York before opening his first ready-to-wear business in 1956.

Over the years he won numerous awards, including the 1996 lifetime achievement award from the Council of Fashion Designers of America. AP