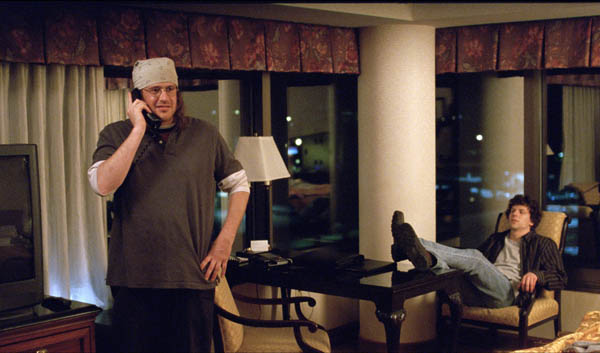 This image released by A24 Films shows Jason Segel, left, as David Foster Wallace and Jesse Eisenberg as David Lipsky in “The End of the Tour.” [AP/NEWSIS]

LOS ANGELES - The 1941 film “The Wolf Man’’ presents Larry Talbot’s transformation from man to wolf as a form of schizophrenia. So little was known about mental illnesses then, the explanation may have seemed plausible.

Hollywood has come a long way since portraying someone with mental illness as a monster, instead bringing characters to the big screen whose mental struggles look more like the ones experienced by many people in everyday life.

The industry’s more realistic approach to such conditions is on abundant display this summer. At least half a dozen recent releases reflect nuanced characters, both real and fictional, facing mental illness.

Among the conditions onscreen this season are personality disorder (‘’Welcome to Me’’), bipolar disorder (“Infinitely Polar Bear,’’ “What Happened, Miss Simone?’’), schizoaffective disorder (“Love & Mercy’’), addiction and eating disorders (“Amy’’) and major depression (“I Smile Back,’’ “The End of the Tour’’).

“Films will reach millions of people who will never read a psychology textbook or who will never be in therapy,’’ he said. “And often times people who don’t read books do go to movies, so I think films have tremendous potential for shaping public attitudes to mental illness.’’

Realistic presentations of people with mood or behavior issues can help promote understanding and ease stigma for real sufferers, who are plentiful. One in four adults experiences mental illness in any given year and one in 17 lives with a serious condition such as schizophrenia or bipolar disorder, according to the National Alliance on Mental Illness (NAMI).

While personal interaction is the most effective way to eradicate stereotypes about people with mental illnesses, NAMI spokesman Bob Carolla said “movies can be surrogates for personal contact.’’ The organization consults with filmmakers about accuracy and promotes productions that get it right.

Sympathetic portrayals can also be reassuring for sufferers and their families, providing an explanation for some behaviors, said “I Smile Back’’ author and screenwriter Amy Koppelman.

“These mood disorders are real, as real as diabetes,’’ she said, “and there’s this validation we can have’’ in seeing them depicted authentically on-screen.

Actor Jason Segel embraced that notion in “The End of the Tour,’’ in which he portrays author David Foster Wallace, who took his life at age 46 after decades of battling depression.

“The primary thing that’s really important, depression, addiction, any of these subjects that we cover .?.?. the most important thing is that it’s real,’’ Segel said. “And any sort of view that you can toughen up or feel your way out of this or why don’t you just change your outlook, it’s important to realize on a visceral level that this is a real, all-encompassing feeling.’’

“When we stigmatize and suppress and reject and exclude people who are going through tough times, the conditions only worsen,’’ he said. “One of the real powerful pathways to adaptation is to embrace it. .?.?. And that’s what these movies do: They say, ‘This is part of the human condition.’’’