MERS scare over, but tell that to Myeong-dong

MERS scare over, but tell that to Myeong-dong 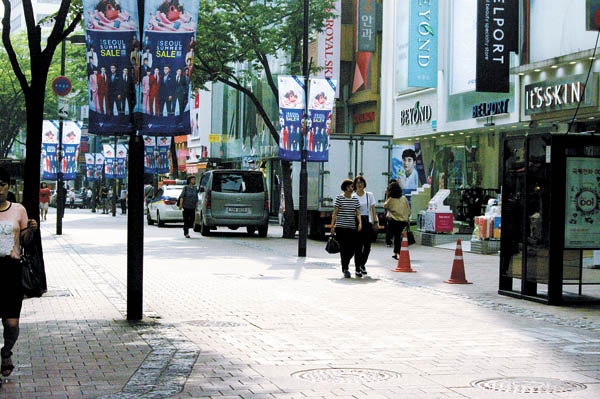 A street in Myeong-dong, central Seoul, which used to be filled with tourists, is empty on July 29 in the aftermath of Middle East respiratory syndrome. By Song Na-yeon

Despite the government’s announcement on July 28 that the Middle East respiratory syndrome (MERS) outbreak had come to an end, the domestic tourism market, especially the rate of tourists from China, does not seem to be recovering.

The streets of Myeong-dong in central Seoul were quieter and less crowded than usual last week, a day after the government’s announcement.

Cosmetics stores, which had always been full of foreign visitors, were empty with few customers. More than half the people shopping were Korean, and there were hardly any foreigners.

“I’ve never seen Myeong-dong Street this quiet in my life,” said one associate at cosmetics shop Missha, one of the most frequently visited by foreigners.

“I have worked here for five years and met many foreigners, but this year is an all-time low.

“Of course there are customers, but there are undoubtedly fewer than last year,” she continued. “I hope people realize that it is not as detrimental to visit Korea as they expect.”

A manager of a music store in Myeong-dong also said he’s lacking customers.

“K-pop is at its peak in popularity among Chinese people, so our shop was always filled with people from Asian countries buying K-pop music,” he said on the condition of anonymity.

“But as you can see, we have no customers now.”

A Korean tour guide at an information center in the neighborhood also expressed concerns about the decrease in tourism.

“There has been a noticeable reduction of visitors compared to last year,” she said.

“However, the number of visitors is slowly increasing, and I don’t see any visitors being repugnant or cautious about MERS.”

According to Statistics Korea, the number of Chinese visitors in June this year was 315,095, a decrease of approximately 45 percent year-on-year.

Government officials and tourism companies are cooperating to accelerate the tourism industry’s recovery.

The Korea Tourism Organization (KTO), Lotte Duty Free and Hana Tour travel agency worked together on a promotional event on July 15, inviting 200 tourism industry CEOs, journalists and travel agents on a guided tour to confirm the country was free from MERS and safe for tourists .

Korean Air and Hotel Shilla are also collaborating on a conference to emphasize the safety of visiting Korea to Chinese reporters and tourism industry CEOs.

The state-run KTO has launched a plan dubbed “Tourism Recovery Mission Within October.” Their largest goal is to bring the number of Chinese visitors up to the average level from one year ago by October.

Everland, the biggest amusement park in the country, is launching programs to alleviate the aftermath of MERS.

The company said it will implement tour programs targeting foreign media corporations, especially from China, and 400 associates from the travel industry by the end of August, focusing on boosting the number foreign visitors.

Everland added that it had signed contracts with Chinese travel agencies to bring them to the park and estimated that approximately 1.3 million Chinese travelers will visit Everland in the latter half of 2015.

Under the sponsorship of Seoul city, the Korea Chamber of Commerce and Industry and the government-run Seoul Business Agency held “Seoul Bazaar Festival” from July 30 to Aug. 1, in an effort to provide an opportunity for financial recovery to small commercial enterprises.

“From June to the end of July, the tourism market situation was at its worst,” said Yoon Nam-ho, a public marketing relations manager at Jeju Lotte Duty Free.

“Circumstances will be difficult for any improvement until the middle of August. We are expecting a recovery from the end of August.”