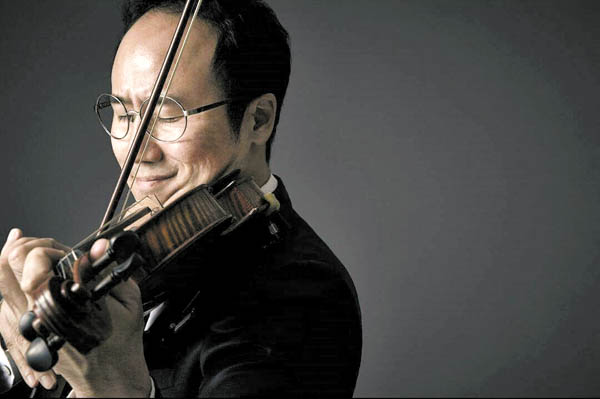 Violinist Won Hyung-joon plans to take his Lindenbaum Orchestra to the JSA on Liberation Day, Aug. 15. Provided by the company

On the 70th anniversary of Korea’s independence from Japanese colonial rule, about 70 South Korean musicians plan to go as far North as they can - to the border village of Panmunjom’s Joint Security Area (JSA). They may get stopped at the checkpoint at Unification Bridge in Paju, Gyeonggi, or they may be allowed into the JSA to be face-to-face with 70 musicians from North Korea and hold a joint concert to mark this meaningful national holiday.

Violinist Won Hyung-joon - who is also executive director of the Lindenbaum Music Company, which established a project orchestra in 2009 in hopes of bringing harmony to the two Koreas through music - has been getting ready for this Liberation Day event for many months, trying to get approval from the South Korean government and the United Nations Command Military Armistice Commission while sending requests to the North.

“Using channels in Berlin and New York, I’ve been sending messages to North Korea that this event is being organized by the Lindenbaum Orchestra on Aug. 15 in Panmunjom’s JSA,” said Won. “I’ve sent them the program, our objectives and requested North Korea to organize a choir of 70 members and come down to the JSA so that we can meet face-to-face to hold this joint concert.”

If they do participate, it will be the first time musicians from the two Koreas hold a joint concert without coming into contact either in Pyongyang, Seoul or a third country, but just facing each other.

“The two groups of musicians - the orchestra from the South and the choir from the North - will be about six meters (19.6 feet) away from each other in the JSA, standing between the blue UN buildings,” said Won. “It may seem impossible to hold a music concert in such an area, but it is because music doesn’t get stopped at the border.”

The orchestra will perform Beethoven’s Symphony No. 9 in D minor, Op. 125 “Choral,” which goes on for about 30 minutes, with an orchestral version of “Arirang” composed by North Korean composer Choi Sung-hwan that the New York Philharmonic Orchestra performed in Pyongyang in 2008. The orchestra will be conducted by German maestro Christoph Poppen, whom Won says is a musician who believes “music unites.”

Won has now received official letters from South Korea’s Ministry of National Defense, Ministry of Unification and the United Nations Command Military Armistice Commission that say they will allow the orchestra to perform at the JSA inside the demilitarized zone (DMZ), but only if North Korea requests the event to be held.

“An official from the Ministry of National Defense told me that they can allow us to go into the area and hold the concert only if the North Koreans come for the joint concert we’ve planned,” said Won, adding that the orchestra will be waiting for the choir at the checkpoint at Unification Bridge.

“After 7 p.m., if we don’t see any North Koreans, we will be performing our program at the checkpoint of Unification Bridge,” said Won. “I really hope the North Korean choir will come down and celebrate the 70th anniversary of our Liberation Day together.”