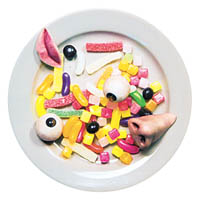 “Married to the Music”

To thank the fans who passionately supported their fourth full-length album, “Odd,” Shinee has returned with the repackaged album “Married to the Music.” This time, with a horror movie concept that seems somewhat weird at first glance, all five members show off their unique styles and fashion sense while contributing to the group effort.

The album was composed by the British team “LDN Noise,” who previously composed Shinee’s latest title song, “View.” With a funky disco sound, the album is highly catchy, with the title evoking various emotions that we feel when we fall in love through simple but impressive lyrics. The melody, beat and even the costumes in the music video are reminiscent of a Halloween party.