Murayama: Abe’s stance on history must be based on facts

Murayama: Abe’s stance on history must be based on facts 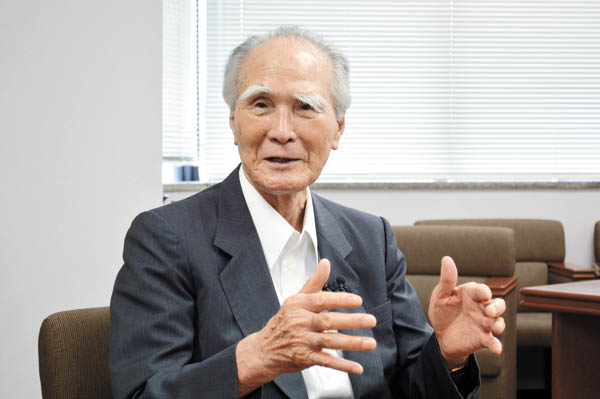 The world will mark the 70th anniversary of the end of World War II on Aug. 15, when the global community will turn its eye toward the address by right-wing Japanese Prime Minister Shinzo Abe.

Abe is currently pushing to pass a series of unpopular security bills that will bolster Japan’s armed forces, despite widespread civilian protests nationwide. There is also doubt as to whether Abe’s speech will repeat the apologies and historical stances declared by previous prime ministers.

At the opposite end of the spectrum on these issues is 91-year-old former Japanese Prime Minister Tomiichi Murayama, who sat down last week for an hour-long talk with Kim Young-hie, a senior columnist for the JoongAng Ilbo, an affiliate of the Korea JoongAng Daily, at the headquarters of the Social Democratic Party in Tokyo.

Murayama is leading a movement opposing the security bills being pushed by the Abe administration and has demanded that the Abe Cabinet take a view of history based on facts.

On Aug. 15, 1995, in a landmark statement during the 50th anniversary of the end of World War II, Murayama acknowledged that “Japan, through its colonial rule and aggression, caused tremendous damage and suffering to the people of many countries,” going on to extend the nation’s “deep remorse and heartfelt apology.”

Nearly 20 years later, on July 1, 2014, the Abe Cabinet approved an unconventional, flexible interpretation of its decades-old pacifist constitution to enable Japan to exercise its right to collective self-defense.

Article 9 of the 1947 Constitution stipulates that “the Japanese people forever renounce war as a sovereign right of the nation and the threat or use of force as a means of settling international disputes.”

On July 16 this year, Japan’s House of Representatives approved, for the first time since the end of the war, a package of 11 security bills that would allow its Self-Defense Forces to assist its allies abroad, even if there is no direct threat to Japan. The bills are currently under debate in the Japanese Diet’s Upper House after the ruling coalition bulldozed the legislation enabling Japan’s right to exercise collective self-defense.

Q. What were you doing on Aug. 15, 1945, when World War II came to an end? How did you foresee the future of Japan after its defeat in war at that time?

A. At the time of defeat in war, I was in the army in Kumamoto Prefecture [in Kyushu]. The whole of Japan was bombarded and the atomic bomb had been dropped [on Hiroshima on Aug. 6 and Nagasaki on Aug. 9] so it was very much like hell. But I felt a sense of relief that the war was really over now. At the same time, I began to worry about what would happen to the country in the future.

Former German President Richard von Weizsacker (1920-2015) said that Germany’s defeat in World War II liberated the German people from Adolf Hitler’s despotism and destruction of civilization. Do you believe the Japanese people were liberated from militarism through its wartime defeat?

I think so. At that time, there was no freedom of press or freedom of anything. Because the war ended with so much pain, it felt liberating.

On July 16, the ruling Liberal Democratic Party and its junior coalition partner, the Komeito, passed in the Diet’s House of Representatives a package of 11 security bills that has been met with fierce opposition. Some 16,000 scholars have signed a petition to protest this move, and many Japanese people are opposed to the bills and holding nationwide rallies. Do you think the people’s opposition will have any effect on keeping Prime Minister Abe in check?

I think the people will gradually have more questions. An overwhelming majority of constitutional law scholars have concluded that [the security bills] are in violation of the Constitution. So young people - seeing the Diet ignoring this and pushing the security bills through sheer force of numbers [by ruling coalition lawmakers] - are wondering, “Is Japan going to be all right like this?” and are pulling themselves on their feet. This strength will spread throughout the nation.

Prime Minister Abe’s policy seems to deny parliamentary democracy. What do you think?

That’s right. It really is a dictatorial government. The public has overwhelmingly risen up to oppose this, and conservative media surveys show that an increasing number of people do not support [the Abe Cabinet]. Ignoring the voice of the people and enforcing [these security bills] is the same as fascism, and it’s wrong.

In other words, do you mean to say that Japan’s democracy is in a state of crisis?

All the Cabinets that followed me promised to the international community that they would uphold the Murayama Statement. During the first term [from 2006 to 2007], Prime Minister Abe said he would uphold the statement, so there was no problem. But in his second term [from 2012], he said that there was no international definition of aggression and raised many doubts. His 70th anniversary address is receiving so much international attention. Historical facts do not change just because time has passed. The address has to be clearly based on historical facts. Trying to change the perception of the past is wrong.

What do you think of Abe trying to issue his own statement?

President Park Geun-hye and Prime Minister Abe each attended events in their respective countries on June 22, to mark the 50th anniversary of the normalization of bilateral ties between Korea and Japan, which can be viewed as an opportunity to improve relations. But the issue of Japan’s forced recruitment of thousands of women into wartime military brothels has not seen much progress.

How do you think we can resolve the “comfort women” issue?

There is a Korean proverb that goes: “The one who tied the knot must untie it.” And it is as this saying goes. The comfort women issue was one that the Japanese military and government made. It is only natural that the side that caused the problem resolve it.

The intention to resolve the comfort women issue needs to be relayed by those responsible for the government, and there needs to be headway in discussions.

Do you think that Prime Minister Abe has such an intent?

Regardless of whether he has such an intent, that is the only way.

On Aug. 13 and 14, an international body on peace in Northeast Asia will issue a statement in Seoul describing Article 9 as the cornerstone for peace in the region. As Abe pushes for collective self-defense so that Japan can become a “normal state” that can wage war, do you think Japan’s peaceful constitution can be maintained?

For 70 years after the end of the war, Japan - under its pacifist constitution - said it will not wage war, and until today has kept the peace. Changing the interpretation of the Constitution and turning Japan from a nation that cannot wage war to one that can is a serious shift. A crisis must be resolved through diplomatic efforts. That is the natural path that Japan has to take under a peaceful constitution. Changing it to allow Japan to be a war-waging country must never be allowed.