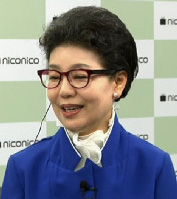 President Park Geun-hye’s younger sister made controversial remarks in an interview that seemed to take Japan’s side in disputes between Seoul and Tokyo over history issues, including the sensitive issue of wartime sexual slavery.

Park Geun-ryeong, the president’s 61-year-old sister, gave an interview to Japanese video-sharing portal Niconico that was broadcast on Tuesday.

“I am sorry that we are not doing a better job taking care of the comfort women victims,” she said, “and just continue to release news that criticizes Japan.”

Her remarks contradict President Park’s efforts to encourage Japan’s government to face up to its wartime aggressions and compensate and apologize to the victims of the Imperial Army’s forced recruitment of young women and girls as sex slaves during World War II, euphemistically referred to as “comfort women.”

The younger Park said that it was Korea’s responsibility to compensate the comfort women victims because it was well-off now.

Park spoke about the relationship between Korea and Japan in an hour and 40 minute interview pre-recorded at the end of last month in which she defended Japanese politicians’ visits to the controversial Yasukuni Shrine in Tokyo.

She criticized Korea’s Ministry of Foreign Affairs for raising the Yasukuni visits as an issue, calling it “intervention in Japan’s domestic affairs.”

Doing so “creates a negative perception” of the Korean government, Park said.

Seoul and other victims of Japan’s colonial rule see Japanese politicians’ visits to the Yasukuni as glorifications of Japan’s past invasions, colonizations and wartime misdeeds.

In Dec. 2013, Prime Minister Shinzo Abe made an unexpected visit to the shrine, which enshrines 14 Class A World War II criminals, which drew a strong backlash not only from Seoul, but also Beijing and Washington.

But Park ignored this and said, “Nobody thinks that they are going to start a war by visiting the Yasukuni Shrine,” adding it was natural to pay respect to ancestors.

“It is embarrassing for neighbors to criticize each other, and constantly brewing conflict over history issues is an embarrassing act for the nation,” Park said.

She said that the Korean government “demanding an apology every time the Japanese prime minister changes should be seen as something embarrassing from a third country’s perspective.”

“Words spoken by politicians are usually carried in the media, so that is what comes out in the news,” Park told Japanese viewers. “Please understand that most Korean people hold the same views as me, so I hope you can hold a lot of love for Korea.”

In regard to their father, former President Park Chung Hee, achieving normalization of relations between the two countries in 1965, she said, “I am proud of my father who thought that normalization of bilateral relations was the way to live on.”

President Park’s relationship with her younger sister has been sour for over 24 years since they fell out over the control of the Yukyoung Foundation, founded by their late mother First Lady Yuk Young-soo.