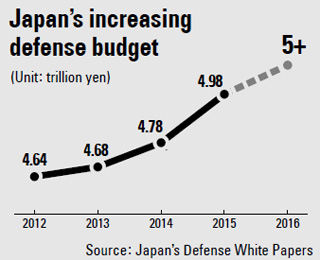 Japan’s defense budget for next year is looking to surpass a record 5 trillion yen ($40.2 billion) as the country moves to make a series of national security law revisions to enable collective self-defense.

The Japanese Ministry of Defense plans to submit to the government a request for its 2016 defense budget proposal an amount that tops 5 trillion yen, reported Japanese media, including NHK and financial paper Nikkei on Sunday.

The deadline to submit a budget proposal is by the end of the month, and comes as Japan is moving to expand the role of its Self-Defense Forces through reinterpreting its pacifist constitution.

A set of revised security bills to legalize collective self-defense are being mulled in the upper house of Japan’s Diet, where a decision will likely be made by the end of next month. Tokyo will also be taking into consideration China’s maritime advances as well as higher procurement costs due to the weaker yen.

If the budget proposal is approved, it means that Japan’s defense budget will have increased for four consecutive years since Prime Minister Shinzo Abe took office in Dec. 2012.

Japan’s Defense Ministry initially requested a 2015 budget of 5.05 trillion yen last year, though the final amount allocated for this fiscal year did not surpass 5 trillion yen.

In its budget plan, the ministry will include costs to build an Aegis destroyer, equipped with the latest ballistic missile defense system, the same as last year. It also plans to request airborne refueling and transport aircraft for the first time, according to the Nikkei, as a part of the Defense Ministry’s 2014 to 2018 Mid-Term Defense Program.

Through the revised security bills, Japan is expected to be able to provide in-flight refueling services to U.S. military aircraft, and the Defense Ministry is expected to choose between the American Boeing KC-46A tanker plan and the European Airbus A330 MRTT multi role tanker transport by the end of this year.

Last month, the lower house of the Japanese Diet, in which the ruling coalition is the majority, pushed through a security legislation package that would revise existing law to enable Japan to engage in collective self-defense, expanding the scope of its Self-Defense Forces overseas and essentially enabling the country’s right to wage war.

However, the controversial security bills, which Tokyo says will help its military provide greater logistic support to U.S. troops, have faced strong opposition domestically and unpopularity in recent media polls.

Japan’s neighbors, many of which were the victims of its wartime aggressions, have urged Tokyo to go forward with its move toward collective self-defense in a transparent manner, keeping in mind the spirit of its post-World War II pacifist constitution, whose Article 9 forever renounced war.

In June, South Korea’s Ministry of National Defense submitted to the Ministry of Strategy and Finance a 2016 defense budget of 40.13 trillion won ($34.2 billion), higher by 7.2 percent compared to the previous year.

Korea and Japan on Wednesday held their first working-level defense meeting in over two years in Seoul.