Drones planned for use in capital rescue missions

Drones planned for use in capital rescue missions 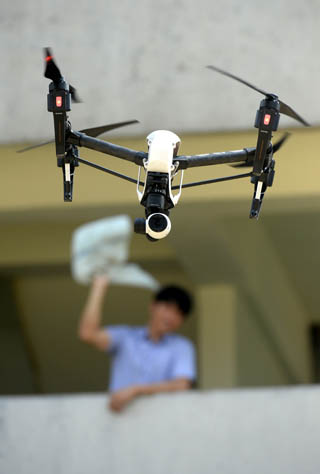 Officials test-fly a drone Tuesday at the 119 Special Rescue Team in the Dobong District of Seoul.[NEWSIS]

Seoul has decided to employ drones to use for rescue operations starting this month, though it remains questionable whether their use will be helpful.

The city government intends for the vehicles to acquire video clips from rescue scenes emergency workers cannot easily access, such as skyscrapers and rivers.

“The video sent by the drone’s mobile live broadcasting system immediately appears in our operations system,” said Wu Byeong-ho, who heads the city government’s Disaster Action Division. “We will be able to better understand the situation and give directions accordingly.”

Their use will mark the first time a local government has employed drones for rescue operations. Starting next year, Seoul plans to employ a total of 25 drones at 23 fire stations across the capital.

However, experts have pointed out that the city must first assess the use of UAVs to review their safety and effectiveness.

One concern is that the drones, manufactured by the Chinese technology company DJI, are primarily intended for leisure activities and may not be useful for rescue operations.

The drones are marketed as toys for adults and costs range between 3.5 million ($3,000) and 4 million won.

“The drones are easy to control or carry around, but they aren’t fit for rescue operations because they can only fly for 20 minutes at a time,” said Bae Jae-seong, an engineering professor at Korea Aerospace University. “In foreign countries, they mostly use fixed-wing drones for special purposes because they can fly for a relatively longer period than rotary-wing drones.”

Another worry is that the drones could potentially cause another accident while operating - crashing to the ground or bumping into rescue helicopters, for instance.

However, the Seoul Metropolitan Government said such incidents are preventable as long as officials controlling the drones are properly trained.

“We will prevent any safety accidents,” said Kwon Sun-gyeong, the director of the Seoul Metropolitan Fire and Disaster Headquarters. “Six firefighters who completed 25 hours of education and training sessions will be controlling the drones.”