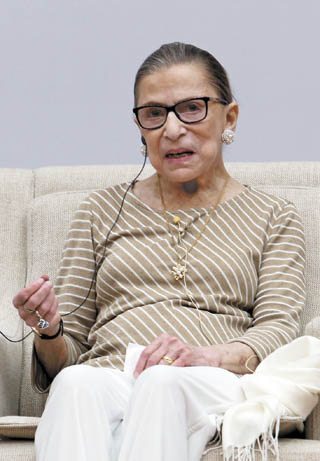 Ginsburg, who is on a five-day visit to Korea, also addressed the changes in the Supreme Court since she joined the bench 22 years ago in an exclusive interview with the JoongAng Ilbo, an affiliate of the Korea JoongAng Daily, at the Supreme Court of Korea in Seocho District, southern Seoul, on Tuesday.

At 82, Ginsburg is the oldest justice. She was appointed by President Bill Clinton in 1993 as the second female on the Supreme Court.

Ginsburg recalled when she was the lone woman on the bench sitting next to eight stout men after the first female justice, Sandra Day O’Connor, stepped down in 2006.

“The most important change, the most conspicuous change, is the public perception,” she said. “When I was all alone, after Justice O’Connor left, I sat at the far end with eight men, which gave the wrong perception to the public.

“Now, I sit around the middle of the bench, with Elena Kagan to my left, and Sonia Sotomayor to my right,” she said, referring to her fellow female justices appointed by President Barack Obama. “We look like we are there to stay. We make up one-third of the bench.”

Ginsburg co-founded the American Civil Liberties Union’s Women’s Rights Project in 1972 to challenge gender discrimination and open up opportunities for women. That year, she became the first woman to be granted tenure at Columbia Law School.

She pointed out that her female colleagues “are not shrinking violets; they are very active. Sotomayor rivals Justice [Antonin] Scalia as the justice who asks the most questions.” Kagan, she said, has her own distinct style, with “a great sense of humor” while asking on-point questions.

Ginsburg’s visit is the second by a U.S. Supreme Court justice since Justice O’Connor’s visit in August 1987.

Same sex unions have yet to be recognized in Korea, however, and Kim Jho and Kim, who were wed unofficially in Korea in 2013, are pushing for their legalization.

On Wednesday, Ginsburg met with President Park Han-chul of Korea’s Constitutional Court and delivered a speech with Justice Kim So-young, an advocate of enhancing women’s status, especially in the judiciary, and one of two females on the bench of the 14-member Supreme Court of Korea.

They led debate-style talks on protecting the rights of minorities at the Supreme Court in Seocho District, southern Seoul. In the interview, Ginsburg emphasized the promotion of gender equality, advising, “Give the same opportunities to your daughters … with no artificial barriers placed in the way.”