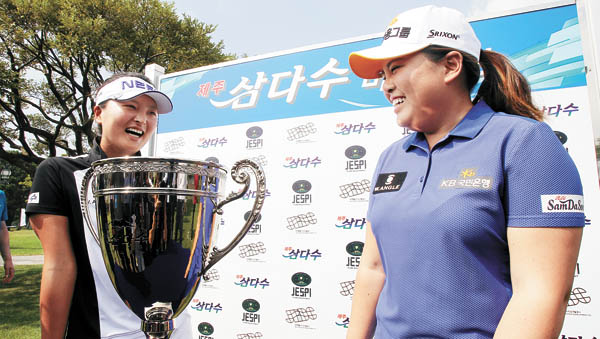 Park In-bee, right, and Ko Jin-young are all smiles in front of the Jeju Samdasoo Masters trophy at the Ora Country Club in Jeju on Wednesday. The event begins today.[NEWSIS]

Fresh from stellar success at the British Women’s Open in Scotland last weekend, Korea’s two golfing superstars are set for another showdown in Jeju today.

The two Koreans are meeting again in the Jeju Samdasoo Masters tournament along with 130 other golfers. The event, with a 100 million-won ($85,500) first prize, opens at the Ora Country Club in Jeju.

Park, 27, has achieved major honors in her golfing career, but there is one goal that still eludes her: the KLPGA Tour event trophy.

Since joining the KLPGA in 2008, Park has only managed four second-place finishes to date. In the LPGA Tour, she has amassed 16 wins, including seven major titles.

This will be the first time since last October that Park has played in a KLPGA Tour event, after she finished second in the KB Financial Group STAR Championship. She tied for fourth place at last year’s Samdasoo Masters.

“I want to play comfortably in front of local fans,” she said at Incheon International Airport after returning from Scotland on Tuesday. “I don’t have a victory in the homeland, but I still have a lot of opportunities left. I will not be impetuous.”

Park’s stamina will be put to the test after her long return trip from the U.K. She only slept two hours after her British win before catching a flight home. She arrived in Jeju shortly after 9 p.m. on Tuesday, but before getting back on the course, she had to attend various celebratory events, including a meeting with Jeju Governor Won Hee-ryong.

But Park, who turned pro in 2006, is not concerned about being game-ready, as overcoming jet lag and fatigue are normal for traveling athletes. “For rookie golfers, it’s obviously difficult, but if you play in the tour for three or four years, you can adjust to [jet lag],” she said.

“Anyone can have a lack of stamina. Pros are also tired and feel fatigue like amateurs, but the difference is whether they have a strong mentality to overcome that.”

Ko was on the same return flight as Park. However, the Scottish tournament was the first tour outside Korea for the 20-year-old golfer.

Ko, who has three wins this season, is currently No. 4 in the KLPGA Tour prize money rankings, earning more than 466 million won. If she wins in Jeju, she can jump to No. 2 in prize money rankings ahead of Cho Yoon-ji and Lee Jung-min. Neither Cho nor Lee are playing in this event.

Top prize money earner Chun In-gee, who is also the 2015 U.S. Women’s Open champion, is also not competing. She has four wins in the KLPGA Tour and has earned more than 719 million won.

“We had a practice round together before and she hits the ball well and has a good mentality,” Park said about Ko.

“If we play together again, we will have an entertaining game.”

Park and Ko are already in the same group for the first two rounds, along with defending champion Yoon Chae-young.

Yoon, who turned pro in 2005, had the first win of her career last year at the Jeju Samdasoo Masters. The 28-year-old said her goal is to show the performance of a defending champion despite feeling a little pressure.

“My shot accuracy is a little low at this moment, but I trained hard last week and prepared thoroughly,” she said on Tuesday. “Ora Country Club is where you should go for a birdie aggressively, so I focused on my putt for practice.”