All will be well in Rio de Janeiro, mayor assures

All will be well in Rio de Janeiro, mayor assures 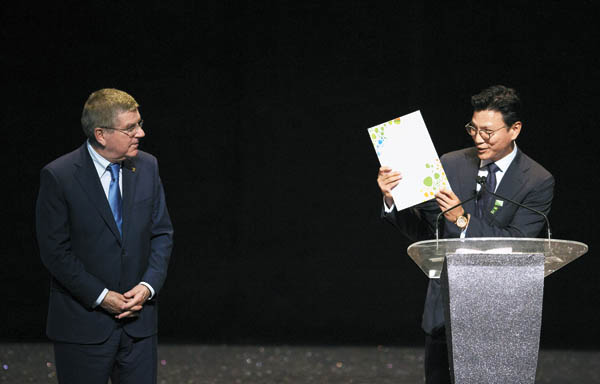 Korea Olympic Committee Vice President Kim Jae-youl, right, holds up the official invitation for the 2016 Summer Games that he received from the International Olympic Committee President Thomas Bach during the ceremony celebrating exactly one year ahead of the start of Rio de Janeiro’s Olympics, at Barra in Rio de Janeiro on Wednesday. [AP/NEWSIS]

RIO DE JANEIRO - Exactly one year ahead of the start of Rio de Janeiro’s Olympics, Mayor Eduardo Paes said on Wednesday that all the venues are running on schedule and will be delivered in time for next year’s games - a feat he compared to a “miracle.”

Speaking in an under-construction arena to a crowd of several hundred journalists in hard hats, Paes said the progress of Rio’s Olympic infrastructure proved that Brazilians were capable of delivering big projects on time and on budget.

The South American nation came under sharp criticism for nail-biting delays and massive cost overruns on the stadia for last year’s World Cup, and the International Olympic Committee has in the past expressed concerns about Rio’s progress in preparing for the 2016 games.

Paes sought to dispel any further worries, giving a detailed rundown of the state of every venue and their expected dates of completion - all well ahead of the games’ Aug. 5 opening ceremony.

“We want to show that we are capable of doing things on time, that Brazil is not a country where everything ends up over budget, everything ends up late,” said Paes, speaking over occasional bursts of construction racket at the Arena Carioca 3, which according to the presentation is 98 percent completed.

“We are literally making a miracle happen here,” he added.

Paes was flanked at Wednesday’s news conference by Carlos Nuzman, an International Olympic Committee member who heads the local organizing committee. The event’s top attraction, IOC President Thomas Bach, was a no-show, apparently because he was exhausted from his plane journey to Brazil that lasted around 30 hours - although he was due to meet later with Brazilian President Dilma Rousseff.

Paes and Nuzman were peppered throughout the news conference by persistent questions about the quality of Rio’s Olympic waters.

An Associated Press study released last week showed dangerously high levels of disease-causing viruses in all water-related venues, and the World Health Organization has asked the IOC to pursue viral testing in Rio during the next year.

Authorities here promised that a cleanup of Rio’s human sewage-strewn waterways would be one of the games’ most enduring legacies, but have since acknowledged that the Olympic targets were out of reach.

Nuzman, however, insisted on the cleanliness of Rio’s waterways.

“We’ve heard from athletes that have swum with fish,” he said, adding, “so there are some discrepancies.”

Both men played down questions about the political and economic problems that are currently engulfing the country.

Brazil is teetering on the brink of recession, amid a multi-billion dollar corruption scandal at the state-run oil giant Petrobras, while the local currency, the real, has plunged more than 30 percent against the dollar over the past year.

Nuzman said that because the majority of Olympic revenues are in dollars, the fall in the real hasn’t proved too problematic.