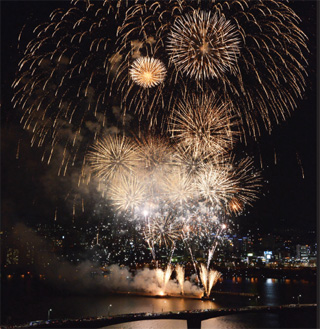 The business lobby Federation of Korean Industries (FKI) and nine conglomerates, including Samsung and Hyundai Motor, are holding festivals in Seoul and major cities from Aug. 7 to 15 to celebrate the 70th anniversary of the end of Japanese occupation.

So far, such events have been mostly carried out in Seoul under the leadership of the public sector, but this year, private companies have rolled up their sleeves to expand the initiative nationwide to contribute to boosting domestic consumption.

“The conglomerates have recently reached a consensus among ourselves that we should contribute to revitalizing Korea’s contracted mood from the recent outbreak of Middle East respiratory syndrome, continuing youth unemployment and the sagging economy,” wrote the FKI in a statement on Thursday. “So, instead of a solemn Liberation Day event, we thought to plan this festival.”

Nine conglomerates will host or sponsor festivals in seven major cities nationwide, where each conglomerate has a strong base.

The festivals will be held in major tourist destinations in each city over the next two weekends and will feature fireworks, concerts and laser shows.

The other conglomerates will hold festivals independent of local governments. Next Friday, Lotte Group will hold an event in Busan, Samsung Group in Daegu and SK Group in Daejeon. Another three conglomerates - LG and CJ Group in Seoul and Hyundai Motor Group in Gwangju - are slated to host festivals next Saturday.

Hanwha Group will sponsor fireworks for all festivals.

To further boost consumption, conglomerates with retail and service businesses have also decided to hold the Korea Grand Sale, a massive discount sales event, earlier than usual this year, beginning next Friday.