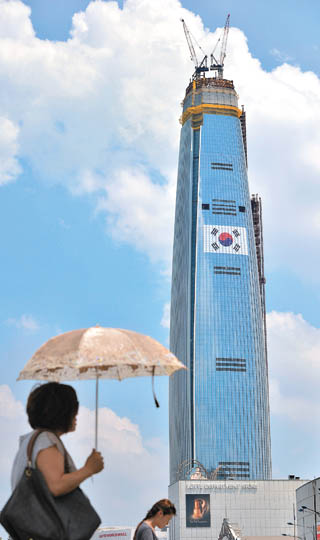 Lotte Corporation, the builder of Lotte World Mall in Jamsil, southern Seoul, displays a mega-size national flag at the 123 story building still under construction on Thursday to mark the upcoming Independence Day on Aug. 15. The construction unit of Lotte Group said that the move is intended to commemorate the national holiday but many consider it as efforts to diffuse criticism surrounding the family feud. [NEWSIS]

Shin Dong-bin, chairman of Lotte Group and co-CEO of Japan’s Lotte Holdings, has further tightened his grip on the retail group by taking over as head of L Investment - an obscure Lotte unit which holds a majority share of key Lotte affiliates.

The second son of the founder is battling with his father and older brother Shin Dong-joo over management control at Lotte.

Consisting of 12 subunits, L Investment has a sizeable amount of stakes in Hotel Lotte, an unlisted hospitality operator at the top of Korea’s Lotte Group, as well as Lotte subsidiaries such as Lotte Aluminum and Lotte Logistics.

The patriarch was the sole head of nine units in L Investment until June but a board meeting at Lotte Holdings selected the son as a co-head of L Investment on June 30.

According to copies of the register released by Yonhap News Agency, the second son is named along with the founder as a representative director at 10 subunits as of July 31.

L Investment has a combined share of 72.65 percent in Hotel Lotte while it is the largest shareholder of Lotte Aluminum, a packaging materials manufacturer, with a 34.92 percent stake.

The Japan-based affiliate has a 45.34 percent stake in Lotte Logistics, making it the top shareholder of the delivery company.

Despite the holdings, little is known about L Investment. “I know nothing about L Investment,” said a representative of Lotte Aluminum who spoke on condition of anonymity. “Even higher-ranking executives barely know anything about it, though it is the top shareholder.”

The representative was not sure of the official English name of the unit, though Hotel Lotte said it is written as L Investment Co. Ltd.

“Not much information is available about the company,” a representative at Hotel Lotte said.

In the regulatory filing at Lotte Aluminum, L Investment is stated as “a company that spun off from Lotte International for investment.”

The filing said the L Investment unit is located in Shibuya, Tokyo.

As the family feud has laid bare the poor, murky corporate governance structure at Lotte Group, regulators are poised to get involved.

The Financial Supervisory Service (FSS) said on Thursday it has asked Lotte for information on L Investment by Aug. 17. Among a dozen subunits, the regulator has targeted L Investment No. 2 as the unit holds the highest shares in Lotte Aluminum and Lotte Logistics.

The FSS is seeking details on ownership structure, the name of the head of the company and financial and audit records.

The Fair Trade Commission (FTC) joined the efforts to enhance transparency. The commission said Thursday it will seek information regarding unlisted overseas units of Lotte Group.

Although Japan’s Lotte Holdings and Kojyunsya, a major shareholder of Lotte Holdings, ultimately control Lotte’s businesses, no official record is available for the two units.

Since they are both unlisted companies in Japan, they are not required to reveal company information.

“Overseas offices tend to be used as a means to control affiliates of a local company,” said Jeong Jae-chan, chairman of the FTC.

“So, the information should be available and the law needs to change.”

In response to the public uproar, politicians are scrambling to fix the problem.

Rep. Shin Hak-yong of the opposition New Politics Alliance for Democracy said Wedn esday he plans to introduce a bill aimed at banning intra-company shareholding with overseas units of companies within this week.

“We don’t know how overseas units govern local companies,” said Rep. Kim Yong-tae, who attended a consultation meeting with the FTC on Thursday. “The companies should make essential information of the overseas entities public.”

Finance Minister Choi Kyung-hwan warned Lotte on Thursday that he will be watching the company.