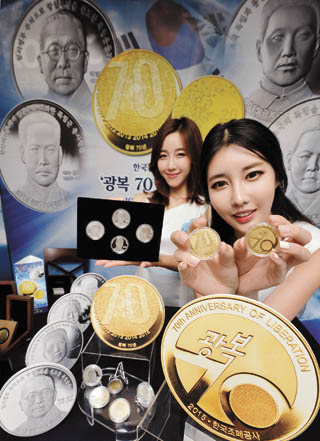 Commemorative medals for the 70th anniversary of Korea’s independence were released Thursday by the Korea Minting, Security Printing & ID Card Operation Corp. They are made of gold and silver and honor historical figures who devoted themselves to the liberation movement, including Yoo Gwan-sun, Kim Gu, Kim Jwa-jin and Ahn Jung-geun. The medals are available at Poongsan Corp, Kookmin Bank and Nonghyup Bank on a first come, first served basis. The prices range 220,000 won ($189) from to 440,000 won. [NEWSIS]