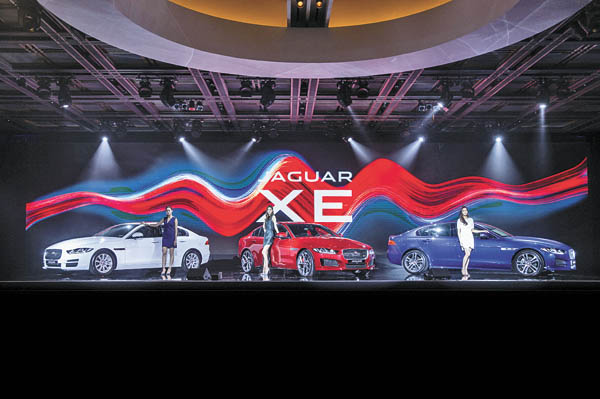 Jaguar Land Rover Korea introduces its sports sedan XE in Seoul on Thursday to capture some of the Korean market. Provided by the company

Targeted at a new generation of young drivers, it is questionable how Korean consumers will react to the hefty price tag for the “game changing” Jaguar XE, which was unveiled at the Grand Hyatt Hotel in Seoul on Thursday.

“We expect the XE to expand Jaguar’s position in the entry-level premium imports sedan that is led by BMW’s 3 Series, Audi A4 and Mercedes Benz’s C Class,” said Baek Jung-hyun, CEO of Jaguar Land Rover Korea.

Although the XE’s price tag is about 2 million won to 5 million won more expensive than rival models - the BMW 320d, for instance, is offered at 46.5 million won - sales aren’t off to a bad start. The company said it has received 200 pre-orders for sedan in the past 30 days.

“Considering the popularity of diesel import sedans in the country we thought the price is reasonable and keeps the car’s competitiveness in the market,” said Cho Joo-hyun, director of marketing and PR for the company.

“Jaguar Land Rover Korea will introduce 50 new cars in next five years and the XE is the very first start of the project that will introduce the company’s new engines and designs,” said Baek. “We expect the XE to be a game changer in the imported car market that will lead us to expand our share among Korean consumers.”

The XE is offered in five trims and three of them - the XE R-Sport, XE Portfolio and XE Prestige - are developed with a 2.0-liter diesel engine while the XE Prestige is offered with 2.0-liter gasoline turbocharger engine and the XE S, the highest model, is built with 3.0-liter V6 supercharged gasoline engine.

The company said the XE is the first compact sport sedan that used “aluminum-intensive monocoque” for its body frame to improve the overall efficiency. The new technology reduces weight while offering explosive driving performance with a power train built with an Ingenium engine. The company said the XE is the lightest among all Jaguar sedans. The company however didn’t reveal the weight of the car in the launch event.

The company said XE was its first with a 2.0-liter Ingenium diesel engine, offering impressive torque. The models that use the engine, the R-Sport and Portfolio, offer 180 horsepower and 43.9 kilogram-meter (318 pound-foot) of torque with an eight-speed automatic transmission.

For speed lovers, the company planted 3.0-liter V6 Supercharger to its high-performance XE S. The engine is installed in the flagship F-TYPE sports car, which offers 340 horsepower and 45.9 kilogram-meter (318 pound-feet) of torque and goes from zero to 100 kilometers (62 miles) per hour in 5.1 seconds.

The company said XE is the first car that has All Surface Progress Control (ASPC), which offers an improved grip on difficult road conditions.

According to data released by Korea Automobile Importers and Distributors Association (Kaida), a total of 140,539 imported cars were sold in Korea in the first seven months of this year; 69 percent of them were diesel.

BMW’s 320d was the best-selling compact sedan in July with 316 units sold and Benz’s C Class followed with 196 sold. Since both the 320d (18.5 kilometer per liter, or 44.5 miles per gallon) and C Class (15.6 kilometers per liter) offer high fuel efficiency, it could be an important feature for consumers considering purchasing XE. Jaguar did not reveal the XE’s efficiency.