BIFF presses on despite ongoing row with Busan

BIFF presses on despite ongoing row with Busan 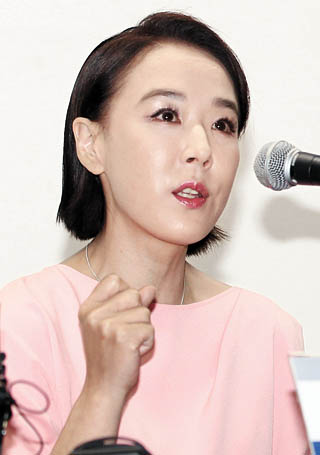 Kang Soo-yeon, a newly appointed co-director of BIFF speaks during a press event on Thursday. [NEWSIS]


Actress Kang Soo-yeon is determined that the upcoming Busan International Film Festival (BIFF), of which she was appointed co-director last month, will be as successful as previous years.

“As you all know, this year has been particularly hard for the BIFF. The only solution to the hardships that the festival has been through is to finish it successfully,” said Kang during the press event on Thursday.

It was her first official appearance in the new role alongside fellow co-director Lee Yong-kwan.

The 49-year-old actress was chosen for the position on July 6, after Lee suggested sharing his post to the Busan Metropolitan Government in order to ease escalating tension between the two organizations.

The conflict arose when the city government, which finances more than half of the festival’s budget, asked Lee to resign from the executive committee for the sake of renewing the event. However, the de facto reason behind the conflict goes back to last year when the festival went forward with screening a controversial documentary about the Sewol tragedy, “Diving Bell,” ignoring the city’s request to cancel the screening.

“I know exactly what you guys are concerned about, but those kinds of problems have been happening since the first edition of the festival and are still going to happen in the future as well,” Kang said. “However, despite all that, the festival has been carefully choosing quality films, which is one of the main reasons the festival has developed into the biggest film festival of Asia. This [agenda] is not going to change.”

Lee, who has been directing the festival since 2010, showed a more relaxed attitude toward the upcoming festival.

“We have been through a lot,” Lee said. “But all in all, it was a good experience. I consider it as a growing pain.”