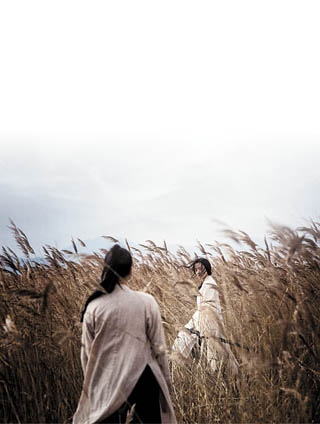 Hong-yi (Kim Go-eun), left, and Wol-so (Jeon Do-yeon) confront each other in the upcoming film “Memories of the Sword.” Provided by Lotte Entertainment

The upcoming “Memories of the Sword” is in many ways the type of experimental film that would be overlooked by a Korean director.

Set in the turbulent final years of the Goryeo Dynasty (912-1392), an unusual era to be shown on the silver screen, it also ventures into the expansive field of martial arts films, which has been considered the realm of Chinese or Hong Kong cinema.

“I wanted to take my cinematic ability to the next level,” said director Park Heung-sik during a press screening event on Wednesday at Lotte Cinema in Gwangjin District, eastern Seoul.

The film largely revolves around the poignant relationship and heartbreaking fate of three swordsmen - Yu-baek (Lee Byung-hun), Wol-so (Jeon Do-yeon) and Hong-yi (Kim Go-eun) - who are destined to kill each other.

Yu-baek and Wol-so, both of whom are skilled swordsmen, used to love each other very much, vowing to use their special set of skills to make the world into a better place, along with Yu-baek’s older brother Pung-cheon (Bae Soo-bin).

However, Yu-baek, who has always been the ambitious dreamer of the group, suddenly betrays the others and becomes a member of the royal court.

For the next 18 years, Yu-baek cunningly plots his way up the social ladder, while Wol-so, who has gone blind, keeps a low profile and waits to one day take revenge on her former beloved.

Young girl Hong-yi, who was left an orphan when she was a baby, also waits for the day when she can get back at the assailants who killed her parents.

In order to compensate for the complicated relationships, the film utilizes a number of flashbacks to explain each of the characters’ pasts.

While it is not certain whether the explanations are thorough enough to lay out why they are targeting each other, they seem even more frivolous once they start to hinder the film’s flow.

In terms of martial arts, also, many scenes cannot improve on the martial arts masterpieces from Hong Kong and China like “Hero” (2002) and “Crouching Tiger, Hidden Dragon” (2000).

The three protagonists precisely perform the choreographed action sequences, most of which take place up in the air. While a round of applause should be given to the actors for pulling off so many wire scenes where they soar through fields of white flowers and fly between bamboo stalks, these scenarios are something that we have seen before.

Park admitted that the drama is the core element of the film, not the action.

“Growing up, I have seen many martial arts movies from China and Hong Kong, but I tried to differentiate my film by showing really dense emotion,” said Park.

“It is as if I used action sequences as a means to deliver the emotions,” he added.

Realizing his intentions, many action sequences were filmed in slow-motion, which at some points maximizes the film’s visual aesthetics, but at other times takes away from the thrill and tension that are supposed to keep the audience on the edge of their seats.

Choosing between showing splashy action scenes and depicting the tragic fates of the protagonists, Park definitely went with the latter.

However, the loose links connecting the triangular relationship ultimately make the viewer wonder: Wait, what are they fighting for?

“Memories of the Sword,” opens nationwide on Thursday.