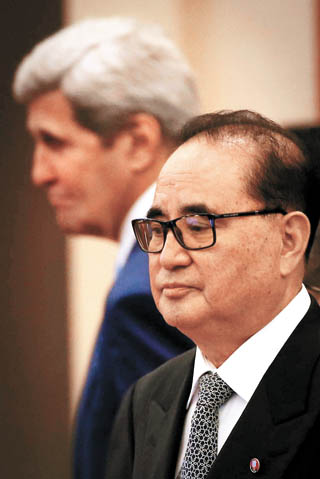 A spokesman for North Korea’s top diplomat warned that continuing the annual joint military exercises between Seoul and Washington may provoke Pyongyang into waging a second Korean War.

“If the U.S. continues to misuse [North Korea] as a pretext for strengthening military alliances, including a massive arms buildup, it will invite responsibility for leading to the outbreak of a second Korean War,” Ri Tong-il, a spokesman for North Korea’s foreign minister, told reporters on Thursday on the sidelines of the Asean Regional Forum (ARF), a security dialogue taking place in Kuala Lumpur.

Amid concerns that Pyongyang may be preparing a missile launch for the upcoming 70th anniversary of the founding of its ruling Workers’ Party, he added that North Korea “will continue to strengthen and increase already diversified high-precision, miniaturized nuclear forces.”

Top diplomats from 27 countries are currently gathered in Malaysia to attend the two-day forum.

“We have the power to face any type of war, no matter the type of war the United States chooses,” Ri said.

The diplomat further defended his country’s strategy of pursuing economic growth and its nuclear weapons program. “This strategic line has proven itself to be more than right. With the help of ever-growing and strengthening nuclear armed forces, the [Democratic People’s Republic of Korea] has been successful in keeping in check all sorts of military provocations and challenges at every stage, successfully deterring a war,” he said, referring to North Korea by its official name.

He also criticized what he described as a Washington-led campaign against North Korea’s human rights record.

“U.S. sanctions will encourage and inspire a greater explosion of anti-U.S. sentiment among our people and make them redouble their efforts over a hundred times,” Ri said, emphasizing that “socialism will stand” in North Korea.

Much attention was also placed on the interaction between South Korean Foreign Affairs Minister Yun Byung-se and North Korean Foreign Minister Ri Su-yong, who also attended the forum and held bilateral talks with nations including Russia.

“North Korea is holding bilateral talks [with other nations], and I think that it may use this opportunity to explain its position,” Yun told reporters. “However, during the conference, I was able to confirm that many countries have expressed to North Korea serious concern over the development of its nuclear program. I hope that during this conference, North Korea will listen carefully to international opinion.”

Because the foreign ministers from all the member nations to the six-party talks were gathered at the ARF, observers were curious to see what sort of denuclearization message would be conveyed to Pyongyang.

The six-party talks with the two Koreas, Japan, Russia, China and the United States was formed with the aim of convincing Pyongyang to abandon its nuclear ambitions, though discussions have been stalled since late 2008, when the North walked out. Yun was not expected to meet separately with Ri, though the two had an opportunity to greet each other Wednesday at a gala for foreign ministers.

Yun also emphasized to his Japanese counterpart that Prime Minister Shinzo Abe’s statement next week to mark the 70th anniversary of the end of World War II could be a catalyst in progressing bilateral ties.