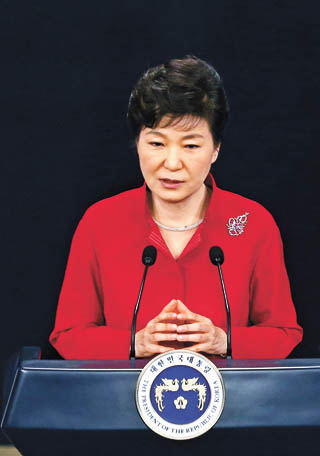 President Park Geun-hye vows to reform Korea’s labor market in a speech to the nation Thursday from the Blue House’s press compound. [NEWSIS]

President Park Geun-hye made a strong call for reforming Korea’s labor market, stressing that the country’s competitiveness is being eroded at a worrying pace because of its rigid labor practices.

“The government will strongly push for reforming the labor market as a first step to reviving our economy,” said Park in a nationally televised statement to the nation on Thursday at the Blue House. “Overhauling the labor market is the equivalent of creating jobs.”

Park said it was essential to introduce the so-called peak wage system and vowed to adopt the system in the public sector. Doing so, she said, would lead to the creation of 8,000 new jobs for young Koreans, whom Park described as the three-giving-ups generation, a term recently coined for young people who have lost hope of ever having children, a spouse or even dating.

Under the peak wage system, people nearing retirement keep their jobs on the condition that their salaries get reduced gradually. This is supposed to save companies enough money to increase their employment of entry-level employees.

But introducing the system has faced a backlash from unions because it runs counter to the country’s traditional seniority-based wage system. They also believe the companies will bank the savings and not use them to hire young people.

President Park spoke starkly about the economy, saying Korea’s future would be determined in “three to four years” depending on reforms on four fronts: poorly managed public sector companies, a rigid labor market, inefficient education and the financial industry.

“A path we are about to undertake could be a challenge for the people,” she said. “But for our next generation, it is the one we must take.”

Park said reforms would make Korea’s labor market “more fair and flexible,” which she said would lead to more jobs.

Park warned that without reforming the labor market, the plight of temporary workers and jobless young people will never be fixed, stressing that providing jobs for the young is a key to raising the country’s low birth rate.

A gap between conditions for salaried and temporary employees is widening as companies look for cheaper contract workers, making it even more difficult for young Koreans fresh out of college to find quality jobs.

It remains to be seen if the labor reforms succeed. The general election scheduled for next April could dampen government efforts to carry them out, depending on how unpopular they are with the public.

In making her case, Park stressed her government would fully back the resumption of talks by a trilateral committee comprised of the government, labor organizations and representatives of business to reach a compromise on labor reforms.

“I sincerely ask the labor unions and companies to resume the talks and make concessions on each side so they can reach an agreement,” said Park.

Park’s strong words highlighted challenges facing Asia’s fourth-largest economy. Hit by a slump in exports, an outbreak of Middle East respiratory syndrome (MERS) and tougher competition from Japan thanks to the weak yen, the Bank of Korea estimates the country’s economic growth at only 2.8 percent this year. The unemployment rate for people aged 15 to 29 stood at 10.2 percent in June, much higher than the overall joblessness rate of 3.9 percent, according to government data.

Park also shed light on what she called “low productivity and lax management” practices in the public sector and vowed to “merge government agencies whose functioning overlap.”

On reforms for the education sector, Park chastised universities that care less about educating students and simply try to get them jobs, saying the government will “proceed with a strong reform measure to restructure college education to meet the needs of society for talent.”

On the financial sector, she cautioned that it could be left behind if doesn’t catch up with the global financial industry’s move into fintech, which combines finance with technology.

Park’s statement to the nation on Thursday, which was her fourth as president, came 14 months after her previous one in May 2014 to address the sinking of the Sewol ferry, the country’s worst maritime disaster.

While it was initially assumed that Park would take questions from reporters, she did not, reinforcing critics’ complaints that she lacks communication skills and heavily relies on scripts.

Park’s press conference came as she passed the halfway mark of her five-year term. This year was considered the best time for her to push ahead with reforms, as no major elections are scheduled in 2015.

The opposition New Politics Alliance for Democracy (NPAD), however, criticized Park for not apologizing for the government’s poor handling of the MERS outbreak and a hacking scandal that plagued the country’s intelligence service.

“Park’s statement ended without a single apology for the MERS outbreak and the hacking scandal, and it was a mere monologue and unilateral instruction, which is very regrettable,” said Rep. Park Soo-hyun of the NPAD.

Business organizations welcomed Park’s message. The Federation of Korean Industries said in a statement that the time had come for representatives from labor, companies and government to reach a consensus on reforms so that conglomerates can maintain global competitiveness, which it said would create more jobs for the younger generation.