Adventures in Korea in gym shorts

Adventures in Korea in gym shorts 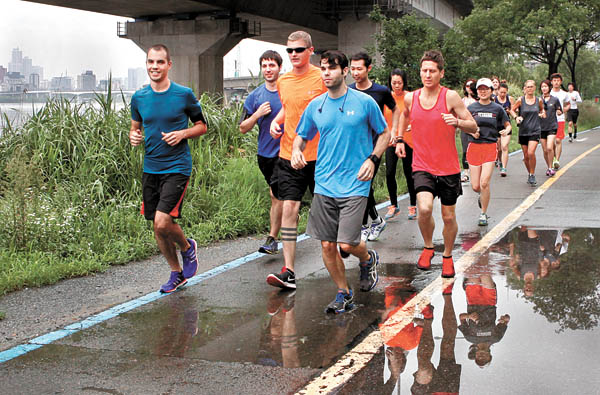 Ryan Rodgers, front center, the organizer of Runsploring Seoul, and other participants, or runsplorers, begin their “Runventure” on July 26 at the Han River Park near Sangsu Station, western Seoul. By Park Sang-moon

On the hot and humid Sunday morning of July 26, more than 20 people in running suits showed up at Sangsu Station in western Seoul for a “Runventure.”

A sudden shower an hour before they met failed to cool their enthusiasm. All 27 people who said they would come on a webpage at meetup.com appeared for the run along the Han River.

Keeping with the portmanteau, they call themselves “Runsplorers.” Runsploring, which began in San Francisco in 2011, is a combination of running and exploring, in which participants pick a starting point and route and run at a comfortable pace and see new parts of the city. Participants stop if they come across an amazing view, landmark or something else that sparks their interest.

Inspired by the original California group, Runsploring Seoul started in September 2012 and has had several organizers. Ryan Rodgers, 35, has been the main organizer for over a year.

The weekly gathering has tried Namsan, World Cup Park and Han River Park, but also goes outside of Seoul to places like Ilsan Lake Park. Up to 30 people may join each time.

After storing belongings in lockers at the subway station, the runsplorers moved to the nearby Han River Park, where they were supposed to start the runventure.

“You can choose to run down either to the Ichon Park if you want 10 kilometers [6.2 miles] or just to the Wonhyo Bridge if you want a five-kilometer run,” Ryan said during a warm-up session. “Please come back in an hour to this point and we will jump on the subway and move to Daeheung Station for some food and a badminton tournament.”

Some of the participants did the 10-kilometer run while others chose to walk in the summer heat.

“We have walkers too,” said one of the co-organizers. “A lot of the older people are really good [runners].”

The running was followed by a badminton tournament on a court near Daeheung Station. It is a social event that is held two to three times a year. About 30 people gathered at the court with food and beverages.

Socializing is a main part of the runsploring. When there is no badminton tournament, they have lunch or coffee together after running in the morning, or even go on a picnic.

The club is most appealing to people who want to work out and make friends.

“I’ve been in Korea for three years and started coming regularly two to three months ago,” said a participant. “I tried lots of other clubs but stuck with this one because the other ones are party-oriented, while this one is healthy and includes running.”

Many of the participants are Korean. On July 26, 11 of 27 people who signed up were Korean.

Speaking English is another reason some join.

“I have to use English for my job and talking about even trivial things helps me,” said Jeon Seul-gi, 31.

The next gathering for the club is Aug. 16, at Namsan Park, although people will gather at Dongguk University Station. Signing up can be done at http://www.meetup.com/Runsploring-Seoul/.