Property in Gangnam is on the rise

Property in Gangnam is on the rise 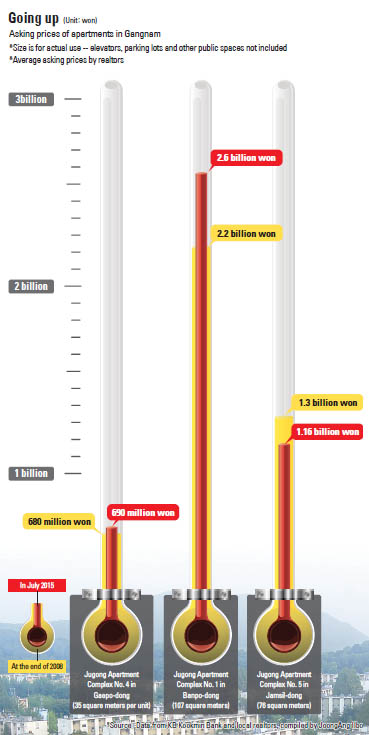 The complex is awaiting redevelopment.

That price is the same as the peak price for such units oin 2008, just before Korea was hit by the global financial crisis. Owners of similar units are asking 690 million won.

“The asking prices of other nearby apartments, such as Gaepo Siyeong apartment or Jugong complex No. 1, 2 and 3, are also continuously rising,” said Jeon Yeong-jun, a real estate broker at Sebang real estate office. “Owners are cancelling sales amidst rising prices, so the number of units put on the market is not that high.” 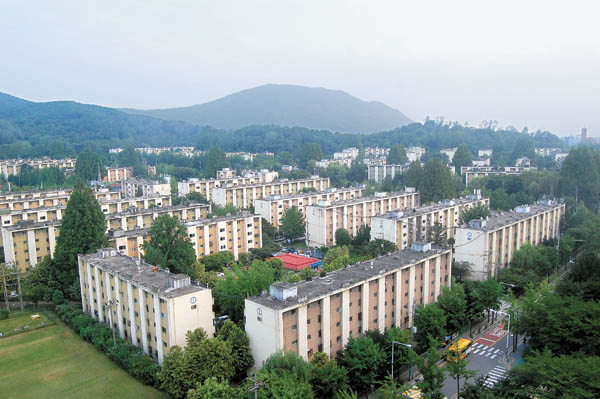 In Banpo-dong, Seocho District, where a cluster of aging apartments are located, a 107-square-meter unit in Jugong Apartment Complex No. 1 also rose about 200 million this year, or 8.3 percent, reaching 2.6 billion won.

Prices of such units have climbed since last year, surpassing their previous peak price of 2.2 billion won.

The real estate market in Gangnam, the country’s most affluent region, is rebounding this year. Prices of old apartments awaiting redevelopment are jumping, and that could also affect relatively newer apartment prices in Gangnam.

Data from the Seoul city government showed a total of 133 units at Jugong Apartment Complex No. 4 in Gaepo-dong were sold in the first half this year, rising from 106 total sales in 2014.

“A total of 34 units were sold in July alone, the highest number for a July in the past decade,” said Park Jun, a realtor in Jamsil-dong.

With the increasing sale of the old apartments in Gangnam, redevelopment plans are also speeding up.

“There is no reason for owners to deposit their money in banks,” said Lee Nam-su, a real estate analyst at the Shinhan Investment Corp. “And it is also easier for people to get a mortgage. So there are more people trying to invest in old apartments awaiting redevelopment.”

A recent survey by the Korea Development Institute showed that 62.2 percent of 402 economists forecast the price of apartments would rise in the second half of this year boosted by the low interest rates and the spike in prices of jeonse, lump sum deposit rental apartments.

“Real estate in Gangnam will be booming thanks to the increase in investments by high-income people,” said Song In-ho.