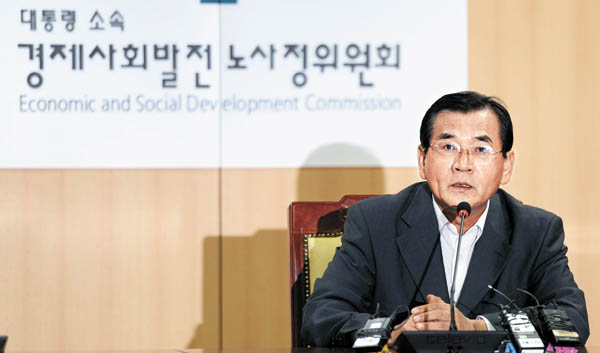 Kim Dae-hwan, chairman of the presidential commission in charge of the arbitration among unions, corporations and the government, talks to the press at the government complex in central Seoul on Friday. [NEWSIS]

On the day President Park Geun-hye made a public address urging reforms in Korea’s labor market, representatives of the country’s unions, corporations and the government had a secret meeting that narrowed their disagreements over several contentious issues, sources told the JoongAng Ilbo.

They agreed to resume talks soon on the so-called peak wage system under arbitration by the Economic and Social Development Commission, a presidential body in charge of the labor reforms, the source said.

The commission has been idle since negotiations among the three parties collapsed in April.

It is expected to resume work soon.

At the trilateral meeting on Thursday evening, Employment and Labor Minister Lee Ki-kweon, Kim Dong-man, President of the Federation of Korean Trade Union (FKTU), a major association of labor unions, and Korea Employers Federation Chairman Bahk Byung-won had a two-hour discussion with no other persons in a restaurant in the LG Group’s headquarters in Yeouido-dong, western Seoul.

The negotiators focused on revising current employment rules in order to adopt the peak wage system, which gradually cuts salaries of senior employees as they approach retirement, and to make it easier for employers to lay off workers who underperform.

“They both agreed that there are social problems in making the two issues policy,” said Lee after the meeting, according to the sources quoted by the newspaper.

Over the so-called “easy lay-off” issue, the government has tried to find a position acceptable to both unions and companies, but that was one of the reasons unions walked away from the negotiations in April.

Kim Dae-hwan, chairman of the presidential commission in charge of the arbitration, said in a previous interview with the JoongAng Ilbo, that “many labor specialists advised that it would not be right for the government to legalize issues that should be autonomously decided by unions and management.”

Kim, who stepped down on April 10, taking responsibility for the botched negotiations, announced his return to the position Friday.

“I will resume talks for the issues discussed as of April and accelerate discussions,” he said at a press conference Friday.

Employment Minister Lee has called for unions to return to talks. But Kim, president of the FKTU, said, “If there’s no progress on the two contentious issues before resuming talks, we could face protests again.”

Bahk, from the companies’ side, said, “We could at least make sure there’s a possibility of reaching some agreement on these issues in a final agreement.”

Still, all three negotiators agreed to hold a meeting again to deal with the peak wage system.

Employment Minister Lee called upon companies to show some “sincere measures” to create new jobs as a carrot to persuade unions to agree on issues.