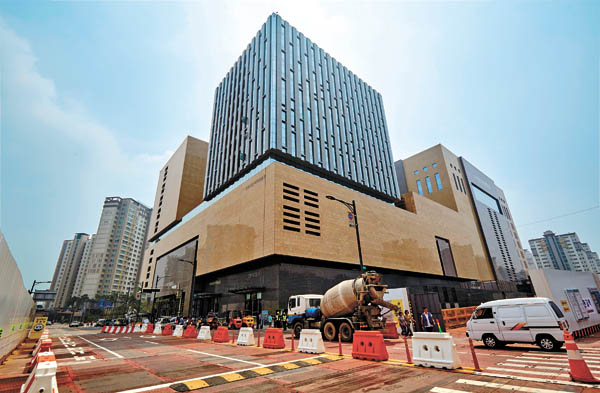 The Pangyo branch of Hyundai Department Store in Gyeonggi is currently under construction and will officially open Aug. 21. Provided by Mont St. Clair patisserie

Last Thursday, an unusual man in a Tam O’Shanter cap walked into the Pangyo branch of the Hyundai Department Store in Gyeonggi, where construction was going on.

He was no other than world famous Japanese baker Hironobu Tsujiguchi, 48, the CEO of Mont St. Clair patisserie and the youngest chef from Japan to win first place at Paris’s “Salon du Chocolat” and “Coupe de France international” bakery competitions.

Tsujiguchi came to check out his newest location, and examined small details like display stands to make sure everything was up to snuff. He asked his employees how they planned to display his cakes and confections and took a look at the other stores opening near his own.

The new branch will be open Aug. 21 under the name Hyundai Pangyo. The total commercial area will be 235,338 square meters (58.15 acres), with seven basement levels and 13 floors above ground - the largest among all department stores in the capital. 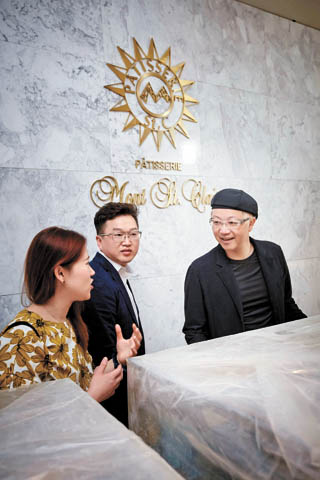 Hironobu Tsujiguchi, the CEO of Mont St. Clair patisserie, right, and Kim Dong-min, his pupil and the manager of the head store in Japan.

The branch will feature 19,850 foreign brands from 82 nations, including 48 restaurants in what will be the largest food court in Korea at 13,860 square meters.

It aims to draw customers with its selection of super-luxury brands hard to find in the domestic market, such as Mont St. Clair.

“Mont St. Clair will serve Korean customers with the store’s famous dessert ‘C’est la Vie,’ made of milk and white chocolate, seven kinds of cakes, three kinds of sponge-cakes and 31 kinds of bread to suit their tastes,” said Tsujiguchi.

His only other local location is at the Banyan Tree Hotel in Jung District, central Seoul.

Other world-renowned luxury brands featured at the branch include Eataly, a marketplace that sells and serves high-quality Italian food; Pierre Herme, a French confectionary store that is famous for its specialty in macaroons; and Sarabeth’s, a restaurant chain based in Manhattan.

According to Kim In-sun, co-director of Sarabeth Korea, the original restaurant is a must-see for visitors to New York and the franchise seats more than a million customers per year. Until now, the closest location was in Japan, and the restaurant has been a hotspot for Korean food bloggers.

The Hyundai Pangyo location will be Sarabeth’s 16th restaurant outside of New York.

Hyundai Pangyo will offer new amenities in addition to its usual lineup of luxury brands like Louis Vuitton, Saint Laurent and Tag Heuer. In order to improve the shopping experience, the branch will feature a children’s library with around 4,500 picture books.

The Bundang branch of Lotte Department Store is working on bringing in more brands to attract young customers, including fashion shop Lucky Chouette, as well as changing up traditional layout design.

“The first floor of any department store only consists of luxury or cosmetic goods and by adding Mail Daily’s specialty coffeehouse Paul Bassett to our first floor, we’re thinking out of the box,” said Kim Gye-ryun, the section chief of the Lotte Department Sore. “We abandoned convention to attract young customers.”

The branch will reopen the store on the same day the Hyundai Department Store opens its Pangyo branch.