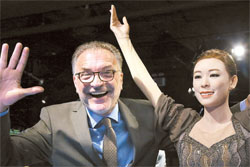 Dominique Marcel, the CEO of Compagnie des Alpes (CDA), poses next to the wax figure of Korean skating champion Kim Yu-na. Provided by the Grevin Museum

The Grevin Museum (Musee Grevin), which features waxworks of public and historical figures, opened its doors on July 30 in Euljiro, central Seoul.

Korea was specifically selected by museum representatives, making it the first country in Asia and the fourth in the world to open a Grevin branch.

Waxwork museums, popular for their displays of identical life-size celebrity figures, are leading tourist destinations in major cities across the globe.

“The wax figures and the exhibition space are above my expectations regarding their degree of completion,” said Dominique Marcel, 60, the CEO of Compagnie des Alpes (CDA), a world-class leisure enterprise and shareholder company for the Grevin Museum.

The Grevin Museum, also known as the Musee Grevin, was first established in 1882 in Paris, and is as prominent in the waxwork industry as Madame Tussauds, perhaps its most famous counterpart.

However, the facility also showcases Korean celebrities and historical figures - out of its 80 total wax figures, 30 are Korean models.

“The philosophy of Grevin is to reflect the host country’s culture and characteristics with regard to the content of the exhibition,” explained Marcel.

The displays include Joseon artist and poet Shin Saimdang and King Sejong, as well as modern figures of professional baseball player Park Chan-ho, who formerly played for the Los Angeles Dodgers, and football star Park Ji-sung.

Marcel added that the museum’s goal was to position itself as the epicenter for the Korean wave, and serve as a landmark in Seoul, which 12 million people visit each year.

Grevin Museum representatives anticipate half its annual 600,000 visitors to be foreign tourists.

The Euljiro Building, an annex of the old Seoul City Hall, was rebuilt in 1938 during the Japanese colonial era to serve as the Seoul branch of Mitsui & Co., a Japanese company. It is currently protected as the country’s 238th Registered Cultural Property and now houses the Grevin Museum.

To attract Hallyu tourists who flood to the center of Seoul around Myeong-dong and Namdaemun Market, it was necessary that the museum be situated in the city center.

“We were able to rent out the building for 20 years after two years of negotiations with the Seoul Metropolitan Government,” said Marcel. “We invested 19 billion won ($16 million) into remodeling the interior of the 80-year-old building, as well as installing the latest lighting and sound systems.”

Approval is needed from the celebrities in question in order to manufacture and display their likenesses.

“Stars think of their own wax figure on display as [similar to being inducted into] the Hall of Fame,” Marcel said. “So they regard it as a privilege.”

The museum is located at 23 Eulji-ro, in Jung District, central Seoul, just a few minutes’ walk from City Hall Station, on subway line Nos. 1 and 2, and Euljiro 1-ga Station on line No. 2.