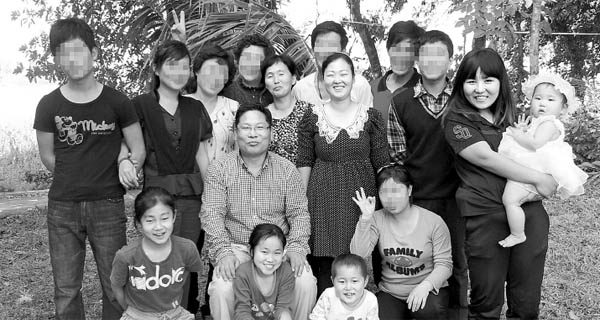 The Rev. Kim Seung-eun, middle, of the Caleb Mission church in Cheonan, South Chungcheong, sits with 15 defectors he helped flee. The picture was taken outside the peninsula, and the faces of some of the defectors are blurred to protect the identities of their family members still in North Korea. Provided by Kim Seung-eun

Directly translated as “flowering swallows,” kkotjebi is a Korean term that refers to homeless North Korean children, who often wander around like those small birds looking for food and shelter.

But over the past 16 years, many of these children have escaped the harsh living conditions they’ve had to endure under the regime and defected to the South, largely thanks to the efforts of the Rev. Kim Seung-eun.

Kim, who directs the Caleb Mission, a Christian organization and church in Cheonan, South Chungcheong, has helped North Korean defectors make their way into South Korea since January 2000.

“I can’t disclose the exact number, but I’ve directly and indirectly helped hundreds of people defect from North Korea,” he said.

At the time, Kim was farming and studying the Bible in the mountains near the Tumen River, which runs along the boundaries of China, Russia and North Korea.

During his stay, he became acquainted with some of the countless North Koreans seeking to defect who begged on the border between North Korea and China to survive.

Kim fell in love with one of them, a woman who wanted to go back to South Korea with him. However, in the early 2000s, no established escape routes for North Korean defectors yet existed.

So Kim roamed all across China, Southeast Asia and Mongolia, and was eventually able to bring the North Koreans he had come to know back to South Korea.

The first official refugee he helped bring over was his wife.

His experience in the Tumen River basin ultimately convinced him that helping defectors was his calling, and he threw himself into assisting them in whatever way he could: In 2009, Kim smuggled four North Korean defectors across the Yellow Sea in a fishing boat.

“By plane or by boat, I’ve used all sorts of means to bring defectors into the country,” he said.

And as the number of defectors he has come to befriend has grown, Kim has learned more about life in North Korea and their hardships.

“[The defectors] sent videos of the horrendous realities of living in North Korea, and there were some who requested help directly, saying that otherwise their children wouldn’t live through the winter,” he said. “I couldn’t help but step in.”

One of the young children Kim rescued in 2012 was Shin Hyeok, whose escape from North Korea became the subject of a documentary film.

Shin’s mother had left for China and his father passed away, which led him to turn to begging to survive. Before fleeing with Kim’s assistance, he had endured intensely cold winters and extreme hunger. However, Kim has yet to meet Shin.

“Once [children like Shin], who believed in me and risked their lives to escape, arrive in Korea, they are sent to federally designated facilities, and it becomes difficult to even hear how they’re doing,” said the reverend, expressing his regret.

Kim’s goal is to continue to rescue more kkotjebi and help them resettle in South Korea.

“I promised to rescue them, whatever the costs, and the children who I was ultimately unable to help out of North Korea weigh heavily on my mind,” he said. “This is not a problem that will be solved through the efforts of just a few people. It’s up to all of us living here to help North Korean citizens.”