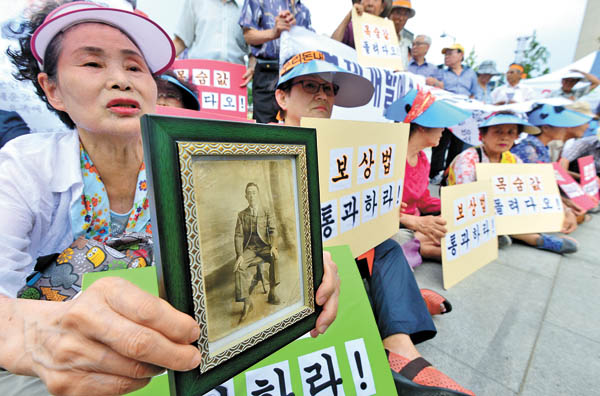 A woman holds a photo of her late father, conscripted during the Japanese colonial era, to demand compensation from the Korean and Japanese governments at a rally Friday in central Seoul. [NEWSIS]

After an advisory panel failed to tell Japanese Prime Minister Shinzo Abe to make a heartfelt apology to occupied neighbors in a statement next week to mark the 70th anniversary of the end of World War II, many international and domestic figures - including one of Japan’s hawkish former prime ministers - are expressing concerns.

In an editorial run on Friday by the conservative Yomiuri Shimbun, Yasuhuro Nakasone, 97, the prime minister from 1982 to 1987, emphasized that Japan’s actions in World War II were “a war of aggression” on Asian countries.

He added that World War II was “a war that should not have been waged and one that was wrong.”

In clearly acknowledging Japan’s invasion of Korea and other Asian countries, Nakasone, an icon of conservatism, contrasted himself to Abe, who told the upper house of the Japanese Diet in April 2013 that the “definition of aggression has yet to be established in academia or in the international community.”

Abe, who will make his statement Friday, a day before the 70th anniversary of Japan’s surrender in World War II, needs to “look squarely at history and, even now, follow the Murayama and Koizumi Statements and include sincere phrases,” Nakasone emphasized, referring to apologies made by Prime Ministers Tomiichi Murayama and Prime Minister Junichiro Koizumi in 1995 and 2005, respectively, for Japan’s wartime aggressions.

In regard to tensions with China and Korea over history issues, Nakasone wrote, “With a frank apology for the past, there is a need to seriously refrain from frivolous actions.”

On Thursday, Abe’s 16-member advisory panel, comprised of academics and businessmen, released a 38-page report that suggested that Abe concede that “Japan expanded its aggression” and waged “a reckless war.” But it failed to advise him to issue the kind of heartfelt apology previous prime ministers have made on earlier anniversaries.

In an editorial published in the Nikkei on Friday, Makoto Iokibe, chancellor of the Prefectural University of Kumamoto, questioned why Japan’s colonial rule over Taiwan was mentioned in the report, but not its colonization of the Korean Peninsula.

“The report notes how, after the Sino-Japanese War, [Japan] colonized Taiwan, but does not touch upon the annexation of Korea [in 1910] after the Russo-Japanese War,” he wrote.

“[The] report mentions that the colonial rule from the 1930s was serious, but why is a judgement on the annexation of Korea missing?” he continued.

The Korean Ministry of Foreign Affairs commented that the advisory panel’s report “is not helpful in reconciling the people of both nations” because it contradicts the Japanese government’s vow to uphold the apologies of previous cabinets.

The two countries have many ongoing issues over history including the issue of the Imperial Japanese Army’s coercion of young women into wartime sexual slavery.

Likewise, U.S. lawmakers and scholars have warned Abe not to miss his best chance to apologize to Japan’s neighbors.

U.S. Rep. Mike Honda of California, who has consistently urged Japan to face its history head-on, emphasized that Abe needs to “clearly apologize to the comfort women victims.”

However, Mark Toner, a deputy spokesman of the U.S. State Department, said at a briefing on Thursday, “We took note of [Prime Minister Abe’s] remarks in Washington about upholding the views expressed by previous prime ministers in regard to the past.”