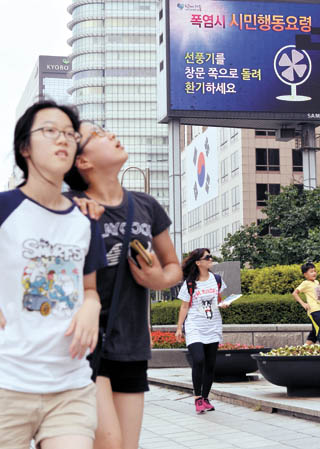 Passersby on the Sejong-daero, the main street of central Seoul, walk under an electronic signboard that displays a message about the heat wave warning on Friday. [NEWSIS]

A heat wave warning was issued for the first time this year in Seoul. Blistering temperatures are expected to linger on the peninsula for a few more days.

The highest temperatures in Korea Friday ranged between 30 and 36 degrees Celsius.

The Korea Meteorological Administration (KMA) Friday issued a heat wave warning in Seoul and its surrounding area as of 11 a.m.

“We expect the highest temperature of Seoul will be 35 degrees Celsius,” said an official with the KMA. “Therefore, we are elevating the heat wave cautions in Seoul and some of the surrounding area to heat wave warnings.”

The Seoul Metropolitan Government also issued an ozone caution, which means that the ozone concentration exceeds 0.12 ppm per hour, in the southwestern part of the city. It is the city’s third ozone caution this year and it includes Yangcheon, Gangseo, Guro, Geumchoen, Yeongdeungpo and Gwanak Districts.

Other regions of the country are suffering from scorching heat as well. Except for some coastal regions in the east, the entire country was issued heat wave cautions or warnings as of Friday afternoon.

With the extremely hot weather, it is currently operating a situation management system.

“We are propagating guidelines for the hot weather through text messages to those living in the region under heat wave cautions and warnings,” said an official of the Ministry of Public Safety and Security. “And for possible heatstroke patients, we are also employing heat wave rescue teams for first aid and evacuation.”

As of 6 a.m. Friday, a total of 705 people were treated for heatstroke this summer and seven of them died, according to the ministry.

Livestock farmers are suffering. The ministry said nearly 1.5 million chickens have died of the heat this year as well as 40,557 ducks and 4,279 pigs.

The KMA forecast that the heat wave will be most intense over the weekend and will let up when it rains in southern regions on Tuesday and Wednesday. The so-called tropical night phenomenon, in which the temperature does not drop under 25 degrees Celsius at night, is going to last through the weekend.

The KMA pointed out that this summer is not as tough as 2013, probably the hottest summer in recent years.