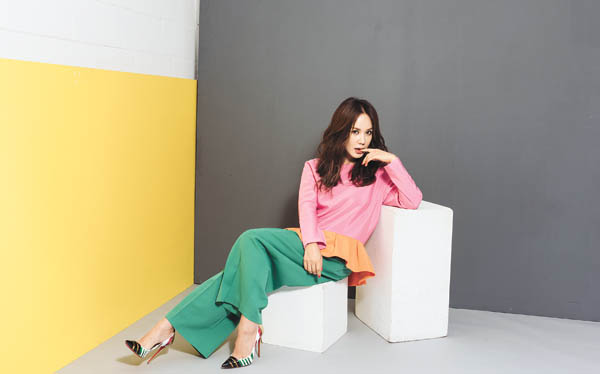 Uhm Jeong-hwa wears many hats. But no matter which hat she is wearing - be it actress or singer - she has always managed to stay on top.

She says she was just “lucky” and the “timing was good,” but everybody knows that her 20-year reign in the highly competitive entertainment scene requires more than just coincidence.

Then, after giving it a moment of thought, she says it might have been because of her “pretty face,” before bursting into laughter.

The 46-year-old Uhm, a diva and a movie star, still seemed like a young, jolly girl at a recent behind-the-scenes meeting. Her positive energy was contagious. 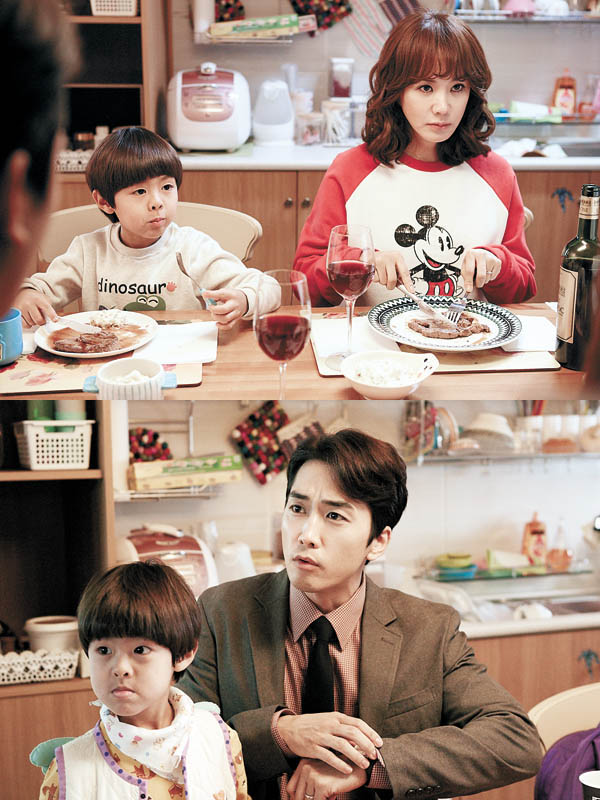 Yeon-woo (Uhm Jeong-hwa), top right, has to live for a month as a housewife with two children and a husband (Song Seung-heon), above right, to get back to her real life where she is a successful lawyer. Provided by the distributor

It was exactly the same feeling one gets from her latest movie, “Wonderful Nightmare,” slated to hit theaters on Thursday.

The film, directed by Kang Hyo-jin, includes elements of fantasy, romance, comedy and drama, which match and mingle well with the magic of Uhm’s irreplaceable charms and stable performance throughout.

Uhm plays Yeon-woo, a successful lawyer whose moral standards depend largely on how much money she is offered for each case. However, due to the mistakes of an employee in the celestial world, Yeon-woo has to live a month as a young mother with two children and a husband. If she blends in well, she can get back to her luxurious and successful life.

Her husband, Seong-hwan, played by Song Seung-heon, may be a civil servant with a humble income, but his dedication to the family and undying love towards his wife is what every woman hopes for.

Nonetheless, Yeon-woo gets very uncomfortable at the fact that she has become a so-called ajumma (middle-aged women), preparing breakfast for her family and folding paper bags during her free time to earn extra money.

However, as the movie nears its end, it pulls at the heartstrings of viewers by showing how Yeon-woo’s values start to change, as she appreciates being loved by her “fake” family members and learning how to care for others.

Its “cheerful and heartwarming” factors were the vital reasons behind Uhm’s pick for this film.

In a recent interview with the JoongAng Ilbo, an affiliate of the Korea JoongAng Daily, Uhm talked more about the films and her personal values these days.

Below are the highlights of the interview.

Q. Can you describe your character Yeon-woo a little more?

A. Yeon-woo is a self-centered and egotistical woman. Having lost her father at a young age and seeing her mother living out her days lethargically, she has always pledged to herself that she is not going to live like her mother, and instead be successful. But she gradually becomes immersed in the love of her family. I wanted the audience to notice the change in Yeon-woo’s state of mind after confronting that emotion that she’s been neglecting all her life.

The funniest point in the film is where Yeon-woo keeps speaking formally due to her former occupation as a lawyer, even when she is at home. What was it like filming those scenes?

It was also a very pleasant shooting experience for me. Yeon-woo needed not be an outwardly comical character. Forcing her to be goofy and overreacting was what I needed to avoid. I feel relieved that those scenes brought about laughter despite all that.

What was it like acting with Song Seung-heon? As he is known for his good-looking face, you also say in the movie that he is “unnecessarily handsome.” Was that an impromptu line?

When I first received the script, I thought to myself, “Where on earth would this kind of lovely husband be?” And I got curious who would take the role. But when I heard that Song was up for the spot, I was actually very surprised because this character was not only the goofy one but also a father with two children. But after I heard why he had chosen the character, I thought he made a very good choice. He wanted to show his more versatile side, to stay in the film scene for a long time. Doesn’t Seong-hwan [Song’s character] look adorable wearing those tacky mom jeans? I think the fact he is so handsome makes things funnier.

What would you feel like if you found yourself with two kids one day?

It would be like a bolt out of the blue. But it surely would be hard to say goodbye as well. You know that sometimes, it is even hard to part with a stranger you met on your journey. How much harsher would it be to say farewell to people who have loved you unconditionally?

If you were to choose between the two lives, which would you choose?

Personally, I have always loved working more than anything. I was always looking for the next project, next song and next film. But, shooting this movie, I came to think again about that. If I meet a family that would love me as much as this one, I would not be able to leave it. Maybe that is the reason why I am still not married. I always doubt myself about whether I can do well at both. What if I want to see my kids while working? It all just scares me.

Did you think about your own family as well while filming this project?

I sympathized a lot with Yeon-woo because my father also passed away when I was very young. Our family has one son and three daughters, and I am the second among them. Our mother raised us all by herself when she was only 28 years old. Like Yeon-woo, I don’t have that many memories about my dad, but I always miss him and depend on him every time I am going through a hard time.

Having heard all that, I suddenly feel like being an actor is such a lucky job because you get to keep looking back on yourself. What do you think about it?

I was very lucky because the characters I played were always well-suited to my age and concerns. When I starred in Yoo Ha’s “Marriage is a Crazy Thing” in 2012, I was arguing with myself about which comes first between love and money. But after the film, I realized that money can’t compensate for the lack of love. Then, when I featured in “Singles” (2003), I asked myself, “Why can’t I live as a single?” It was also similar with my recent work, “Venus Talk” (2013). I think that is the biggest charm of being an actor or an actress.

It seems like your characters in films are always a step ahead of the social norm. For example, your character Dong-mi in “Singles” chose to live her life as a single mom, and that was pretty shocking at the time. What do you think?

You know, my exterior and character is not all that submissive. I guess I like being a step ahead of the others. I think it’s my fate (laughs).

Singer and actor Uhm Jung-hwa is very glamorous. However, you are also very good at playing realistic characters that are far removed from a glamorous life. What is your preference when acting?

My goal is to perfectly be “that woman.” When I am acting a certain character, I have this epiphany moment when I genuinely become united with “that woman.” Whether she is happy or sad, I can completely feel her emotions in all my senses. When I can’t get to that point, I feel very let down. But I guess that is all part of being an actor as well.

Did you get to that point when playing Yeon-woo in “Wonderful Nightmare”?

For this film, I wasn’t pressured to be 100 percent Yeon-woo, but I just enjoyed it. In regards to the heavy emotions near the film’s ending, they really got to me.

Yeon-woo missed out on a lot of things only thinking about going forward. How about Uhm Jeong-hwa?

Well, first of all, I enjoy working so much so that I don’t consider it as working. I’ve always put my job at the forefront of my life, so even if I had free time, I didn’t know how to enjoy it fully. I thought pushing myself was a way of loving myself. It is not like I regret it or anything, but these days I’ve come to enjoy new things such as staying at home peacefully or feeling the calmness of nature. These activities are something I had never imagined myself doing in the past.

Do you have any plans for releasing a new album any time soon?

Promise me that you are going to be the first one to download the album (laughs). I am always preparing myself to take the stage one day.