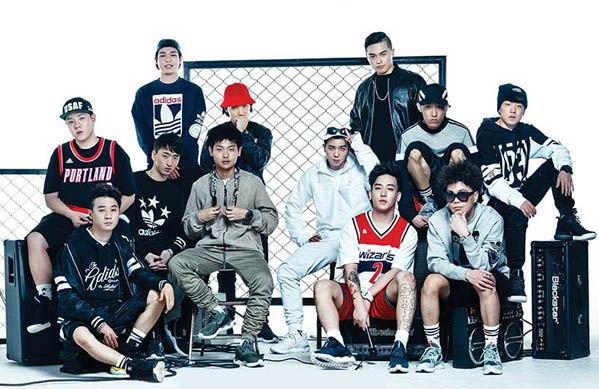 The rappers participating in season four of the hip-hop audition program “Show Me the Money.”

When the all-male trio Seo Taeji and Boys hit the nation with their dance music with hip-hop elements in the early 1990s, it was a huge sensation. People were not only drawn to the unprecedented rhythm and beat, but also to the musicians’ style of wearing baggy pants and oversized shoes - the hip-hop style that soon spread across the nation.

Despite the public’s craze for hip-hop dance music, regular hip-hop never became part of the mainstream back in the ’90s. However, thanks to various hip-hop-influenced acts that followed such as DJ Doc, Jinusean and Drunken Tiger, the genre started to steadily gain popularity until becoming mainstream.

But one of the main reasons the genre has come to the forefront in recent years is due to the popular yet highly controversial debated hip-hop audition reality program “Show Me the Money,” that aired its first season in 2012 and is currently in its fourth season. Even though the show is often embroiled in various controversies, the more it is criticized, the more people seem to pay attention to the program: Currently “Turtle Ship” and “Respect,” performed by the show’s participants and producers, are dominating major music charts even amid such criticism.

Hip-hop specialists agree that Mnet’s “Show Me the Money,” both celebrated and condemned, has contributed to promoting the genre. Hip-hop producer Kim Jung-bok, for example, commented that people accept hip-hop more easily thanks to the program, because it appropriately mixes both the musical and entertainment elements that keep the audience interested. 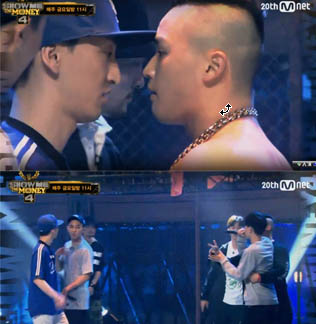 Top: Rappers Andup, left, and Microdot compete in a team rap battle on “Show Me the Money.” Above: Black Nut, right, reacts angrily to Song Min-ho during a team rap battle. [Screen captures]

“Even though the entertainment factors may have made the program slightly deviate from the essence of hip-hop, we can’t deny that ‘Show Me the Money’ triggered people’s interest in the music and its culture,” Kim said.

The public’s acceptance of hip-hop can be seen in major music charts, where hip-hop tracks are in the top spots.

Also, an increasing number of singers are requesting hip-hop musicians to feature on their songs. For example, Boa, who has rarely worked with hip-hop artists since her breakout in 2000, recently had Gaeko from rap group Dynamic Duo feature on her latest song, “Who Are You.”

However, while “Show Me the Money” has helped increase public awareness of hip-hop, it has also fostered negative feelings toward the genre, since the program prioritizes high viewership over delivering quality hip-hop.

In a practice often dubbed “the Devil’s editing,” the show highlights the most controversial parts, frequently topping lists of popular search terms and making headlines.

For instance, one participant, Song Min-ho, drew criticism recently for rapping, “MINO sniping daughters, open your legs like [you’re in a] maternity unit,” which was perceived as disparaging to women.

Consequently, many viewers have come to misunderstand that sexist comments and swear words are what hip-hop is about.

One viewer of the program, Gi Yeo-un, 23, who has watched every season of the show, said, “I’m often shocked by sexist lyrics that the show’s participants say, which makes me feel repulsed at hip-hop.”

She continued, “In the past, hip-hop musicians often criticized society and corrupt politicians, or what needs to be changed,” adding, “These days, however, most lyrics seem to revolve around sex, just like many modern girl groups trying to promote their music through sex appeal.”

Although many viewers like Gi blame the rappers, the problem may lie in the program’s system.

In regards to the show’s editing, Lino Lee from Sony Music explained that “‘Show Me the Money’ tends to purposefully leave a controversy at the end [of almost every episode].”

“Even though the program’s need to boost viewership is understandable, the show would better achieve its purpose of [popularizing hip-hop] if it focuses on showing participants skillfully rapping instead of concentrating on the thrilling scenes, where they make mistakes and disrespect each other.”

Actually, in contrast to common perceptions, hip-hop musicians are nice people who respect others, according to Lee, and he also pointed out that rappers usually cover a variety of issues, from love to work to politics.

However, “Show Me the Money” viewers are mostly only aware of the controversial side, “because they are the segments that are aired on TV.”