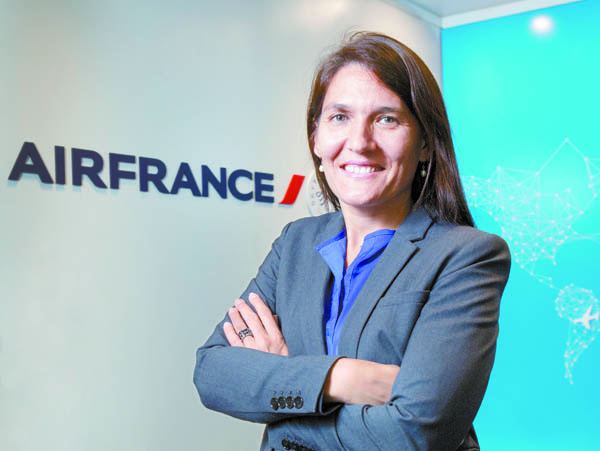 Celine Balmelle, Air France-KLM General Manager for Korea, speaks about her view of the Korean market in her office in Jung District, central Seoul. [By Park Sang-moon]

Air France-KLM is known as one of the early pioneers of the Asian market and was the first European airline to start direct flights from Seoul to Europe in 1984.

The woman at the helm, Celine Balmelle, was appointed as the new Air France-KLM general manager for Korea in July. She sat down with the Korea JoongAng Daily at her office in Jung District, central Seoul, in July to discuss how she plans to lead the company forward in the fast-growing and highly-competitive Korean and Asian markets.

Q. It has been about a month since you started working in Korea, how are things going?

A. I think Korea is a very dynamic market. I’m learning many new things through the people I meet every day. I have been spending my time with staff working in Korea and see they have bonded well. I have also met people in the travel agencies and people in the industry to discuss business like Korean Air.

In the past decade, many foreign airlines have been trying to expand their share in Asia, including Korea. Why do you think this is happening?

Asia is the market that is growing every year and I think most foreign airlines, including the Air France-KLM, have been trying to provide more high-quality services for a long time to expand business territory here. We currently operate 200 weekly flights in Asia as we are trying to reinforce our strength in terms of products and services in the market. We also have about 30 years of history in Korea, which we consider as a key market.

Why is Korea a key market in Asia, compared to other Asian countries such as China and Japan?

Korea is a smaller market than the other two nations, but you can read a trend from Korean consumers. For instance, we launched a mobile application service that allows customers to book tickets and communicate with our staff anytime. We saw that 88 percent of consumers in Korea used the mobile application when they purchased tickets last year, which was the highest rate in the world, and that showed us people here seek a quick and efficient system for their travel.

How are you trying to expand the company’s market share in Korea?

We have a lot of assets to try to capture Korean customers. We try to develop a lot of products that attract Koreans. Air France provides Korean interpreters and some of the cabin crew wear a Korean costume, the hanbok, too promote a friendlier atmosphere for passengers. KLM started operating night flights on the Incheon-Amsterdam route, which leaves from Korea at 12:55 a.m. every day and arrives at 4:55 a.m. in the Netherlands, which means passengers can finish their schedule in Korea and start a day after having a sleep on the airplane.

The competition is quite high here. Koreans love to use the two national flag carriers [Korean and Asiana airlines] and many local carriers and other Asian are here. How do you deal with this?

First of all, we consider other Korean airlines as partners. We are the only European carrier in partnership with Korean Air, of which 98 percent of the nation recognizes. With the Code Share system, passengers using Air France can accumulate mileage and vice versa under the Sky Team alliance.

In order to attract consumers, we try to provide more high-quality services. Air France was the first carrier that launched the premium economy class that offers 40 percent wider seat space than the normal economy. We also provided Korean-friendly in-flight meals like bibimbap (rice with vegetables).

What are your business goals in Korea? Are you considering expanding the business, like operating more flights?

We are not considering operating more flights. What we will try to focus on is to keep our service at its best level for passengers and to be a decent carrier for customers travelling to Europe by efficiently utilizing our business networks around the world.

One of Air France-KLM’s core strategies to expand its share of the Asian market including the “Big Three” nations, Korea, China and Japan, was to provide high-quality services.

In Korea the company started operating a night flight in October 2013 connecting Incheon and Amsterdam to attract businessmen after recognizing that about 80 percent of passengers for the Incheon-Amsterdam and Incheon-Paris routes were white-collar business people.

The company also launched high-quality services like the premium economy class, which combined the best features of business and economy classes and provided 40 percent more space than economy seats, for its Incheon-Paris routes in 2010.

One of the main reasons the company started focusing on the Asian market was to pursue new business opportunities in an unsaturated market.

Expanding in Asia has been a significant goal for most global airlines as it is considered a region that could be a new growth engine for companies which have already found markets, such as Europe, saturated. According to data of the International Air Transportation Association (IATA), the world airline industry will be largely dependent on the Asian market as 33 percent of the world’s air traffic volume will be made in the region by 2028. Last year, the Asian market grew by 5.5 percent, while the rest of the world markets grew by only 4 percent in terms of number of flight routes. The data also said about one billion passengers used airline services in Asia, meaning that one-third of the world’s airline service demand (three billion) was made in the region.

Incheon International Airport has been recognized as the world’s No. 1 airport for 10 consecutive years by the Airports Council International. The country became Asia’s transport hub with about 45 million people using the airport every year. Reflecting such circumstances, many global airlines and even low-cost carriers (LCC) have been competitively knocking on the doors of Asian and Korean markets with upgraded services.

Indonesia’s state-run airline Garuda Indonesia invested $20 billion to purchase 90 next-generation airplanes in June as part of its expansion plans, while Vietjet Air, an LCC in Vietnam, has purchased six additional Airbus A321 aircraft. The LCC will operate a direct flight from Incheon to Ho Chi Minh.

According to Airbus, more than 8,000 new commercial jets and cargo planes are predicted to be needed by 2020 and about 300 of them are expected to be used in Korea, which is worth about $55 billion.