Putting a face on the plastic in your pocket

Putting a face on the plastic in your pocket 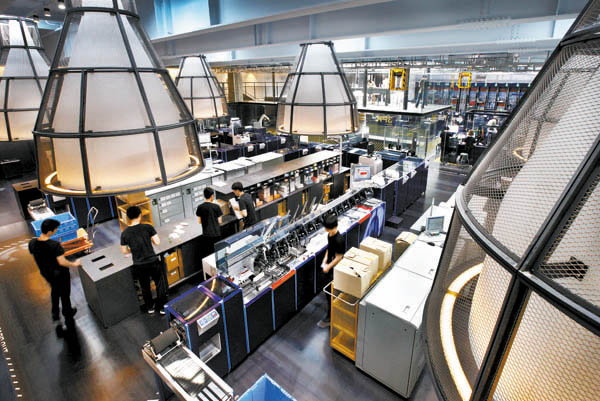 Hyundai Card is hoping to deepen its relationship with credit card holders by allowing them to visit the company’s factory.

Located on the 10th floor of the company’s office building, the factory is designed to look like an Industrial Revolution-era workshop.

The move is one of several shake-ups by Hyundai Card CEO Chung Tae-young, who has also emphasized new designs for marketing cards and worked to create a liberal workplace culture.

Located in the financial hub of Yeouido-dong, the 1,190-square-meter (12,809-square-foot) factory includes a string of assembly lines with about 40 employees making all different kinds of credit cards.

“This building used to only be for our offices,” said a spokesperson at Hyundai Card. “But when we relocated our factory to Yeouido, the company’s executives decided to utilize it as a marketing tool by opening it to our customers.

Starting Aug. 3, the factory is open to anyone who owns a Hyundai Card, along with three of their guests. A new customer can also receive his or her card at the factory in person, rather than having it delivered to the home or office.

“When new card owners receive their cards here, they get a chance to look around the factory and understand how their cards are made,” said the spokesperson. “We hope that if we provide this kind of new experience, the relationship between company and customer could become more intimate.”

A long, transparent bridge is installed above the assembly lines so that visitors can see the entire process.

“We want to feature how a credit card, which is a symbol of financial capital, is actually produced at a factory, a symbol of industrial capital,” the spokesperson said.

The credit card assembly procedure is relatively simple. Under the so-called “auto picking system,” robots take the cards to be produced that day from the shelves and send them to assembly lines, where workers feed them into a machine that inscribes the name of the card’s holder and the card numbers.

The cards are then delivered to the next line, where chips containing the personal information of the cards’ owners are inserted.

Unlike most of the process, the packaging for the credit cards is done by hand. Careful attention is paid to the so-called premium cards - costing an annual membership fee of around 200,000 won ($170) - which are packed in luxurious, colorful boxes along with a brochure detailing the card’s benefits for its new owner.

“Before we moved to this new factory, all of each procedure was separated, not connected in one procedure,” he added.

“With these new devices and automation technologies, the whole process is connected entirely without being interrupted.”

One factory wall is filled with screens showing the assembly process in real-time, including a counter for the number of cards produced.

“Unlike automotive factories, which manufacture a planned amount of products every day, a credit card factory produces a card after a new customer is registered,” he said.

Although there’s no entrance fee for cardholders and their companions, the building’s security is strict. Prior reservations are required, and visitors must carry a pass issued in the lobby. Photos aren’t allowed.

When asked why the factory is not open to non-members to attract more customers, a senior PR director said he intended to keep a high standard for the location.

“This isn’t an amusement park, where everyone - even children - can hang out whenever they want,” he said.

“We want people to visit here to be inspired by this factory. We want to show that a factory can be turned into this unique design and run inside a building in an urban city. In fact, we’ve had many students and professors visit from design departments at universities.”

The factory was part of the Hyundai Card’s marketing strategy, dubbed “Space Marketing,” which caters exclusively to its preexisting cardholders.

Between 2013 and 2015, the company launched three libraries around Seoul that specialized in different sectors - the Design Library, Travel Library and Music Library.

The establishment of the spaces was the first time that a credit card company had launched special spaces for its customers for marketing purposes rather than to make a profit.

Hyundai Card is also innovating in other ways. Most employees are allowed to wear business-casual clothing to work, and in 2014, the company launched its so-called simplification campaign. The drive encourages employees to simplify the reports they send to their bosses, leaving out unnecessary details to give more time for inter-department cooperation and the creation of dynamic content.

“The campaign also dissuaded employees to not spend much time on making power points just because it would appear more appealing to their boss,” the spokesperson said.

“Whenever Hyundai Card releases a new marketing strategy, such as the libraries, a music concert or even the factory, many industry observers say, ‘Why is a credit card company doing this?’” added the senior manager. “But at the end of the day, many of our competitors are following our marketing strategies because we’ve proven that they work.”