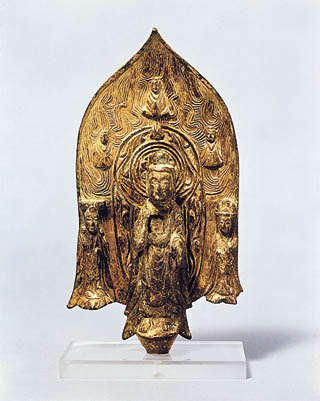 This 15.5-centimeter (6-inch) Buddha triad was excavated in 1930 in Bongsan-ri, Goksan County, Hwanghae Province, in what is now North Korea, and is currently housed at the Leeum, Samsung Museum of Art in Seoul.

Featuring the Shakyamuni Buddha attended to by two bodhisattvas, it is known as the largest existing triad carved in the style wherein all three statuettes are carved on a single large mandorla (Buddhist halo of light).

The two bodhisattvas on each side of the mandorla are considerably smaller than the principal Buddha, making it appear more impressive. Save for slight damages inflicted on the Shakyamuni’s chest and on the lower corner of the mandorla, the triad is preserved comparatively well.

The principal Buddha of the triad is characterized by a plump face wearing a benign smile, a fairly large topknot and a heavenly robe heavily draped down from both shoulders to cover the entire body with the hem flaring outward.