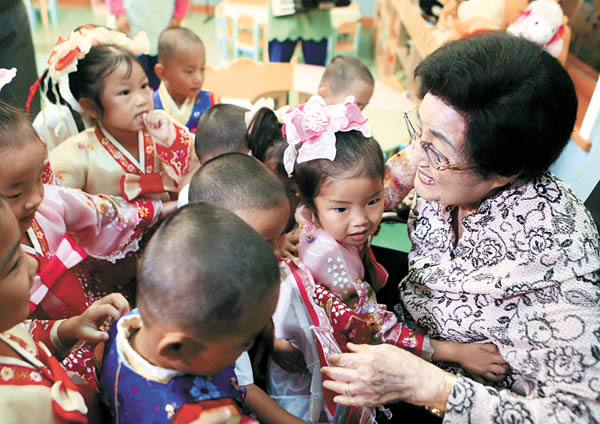 Lee Hee-ho, widow of former President Kim Dae-jung, hugs a child at an orphanage in Pyongyang on Thursday. Lee visited the North Korean capital from Wednesday till Saturday. Provided by the Kim Dae-jung Peace Center

After Lee Hee-ho, widow of former President Kim Dae-jung, returned to Seoul without having met North Korean leader Kim Jong-un during a four-day trip to Pyongyang, concerns grew over the intractability of the freeze in inter-Korean relations.

Kim Jong-un seemed to be signaling his lack of interest in better ties since he personally invited the 93-year-old former first lady to Pyongyang last December.

Before Lee’s departure for the North Korean capital on Wednesday, expectations were high that she would be given a meeting with Kim, especially as the widow of former President Kim Dae-jung, who is treated with reverence in the North for his Sunshine Policy and a series of inter-Korean investments and other initiatives.

North Korea experts point out the Lee’s inability to meet any senior North Korean officials underscore that current bilateral relations are at a nadir.

“The current standoff in bilateral talks is now beyond the point at which it could have been fixed by a civilian individual [such as Lee Hee-ho] at a time when all dialogue channels between the two have been shut down.”

President Park Geun-hye’s government was not spared from criticism that it made no effort to exploit Lee’s visit, reiterating its position that it had no intention of sending a special message through Lee. The Park government has had no achievement in North Korea policy.

With hopes for improved ties dwindling, tensions could escalate as South Korea will hold a joint military exercise with the United States later this month, Ulchi-Freedom Guardian, which Pyongyang always describes as preparation for war.

But a South Korean official from the Kim Dae-jung Peace Center who accompanied Lee, Park Han-su, said Pyongyang appeared more modern than in the past with more high-rise buildings.

“Compared to my last visit three years ago [to pay respects at leader Kim Jong-il’s funeral], Pyongyang seemed to have more high-rise buildings. More lines of people waiting to enter restaurants were also seen,” the official told the JoongAng Ilbo, an affiliate of the Korea JoongAng Daily.

North Korean officials did not stop South Koreans from recording city street scenes and people while moving in a car, in sharp contrast to the past.