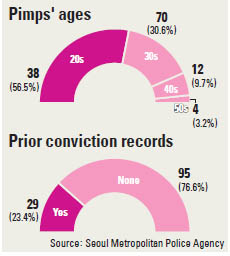 Mr. Kim, a 28-year-old, started working as a pimp in July 2013. He was introduced to the work by a friend. His main job was to post online advertisements on social networking sites and receive reservation calls or texts. He would meet customers at a designated location and take them to a one-room studio apartment used by the prostitutes in Gangnam District, southern Seoul.

Not long after Kim got the knack of being a sex business broker, he opened up his own business by renting three studio rooms in the affluent Gangnam District. For each room, he put up a deposit of 5 million won ($4,293) and paid 500,000 won in monthly rent.

It took less than a year for Kim to be busted - and convicted of pimping.

Kim is just one of an increasing number of men in their 20s and 30s getting into the pimping business. A crackdown on the illegal industry in June by the Seoul Metropolitan Police Agency shows the changing demographic of the world’s second oldest profession. Of 124 pimps busted last month, 70, or 56.5 percent, were in their 30s, while 38, or 30.6 percent, were in their 20s. When combined, sex business brokers aged 20 to 40 comprised 87.1 percent of the total number of pimps arrested last month in Seoul. The number of brokers in their 40s was only 12, or 9.7 percent, while only four were in their 50s, 3.2 percent.

Detective Kim Dong-su, who was involved in the investigation, said young people are now “swarming the industry” because it doesn’t require big investments. “You only need money to rent a one-room studio to run the business,” he said.

“The surge in the use of cyberspace, such as SNS sites, to advertise for the sex business has led to increased participation in the business by people under 30,” said the detective.

Data from the June crackdown proves the surge in use of the Internet for sex business advertising. Of all the pimps busted last month, 120 of them, or 96.8 percent, attracted customers through online advertisements. Another alarming sign is that 95 of the 124 pimps, or 76.6 percent, were first-time arrests, meaning that an increasing number of people with no previous experience are joining the business.

Experts say tougher punishment will be necessary to stem the rising tide of young pimps.

“Law enforcement should impose harsh punishments on those violating the law on prostitution, even if they are first-time offenders, to prevent young people from entering the illegal business,” said Lee Woong-hyuk, professor of criminal science at Kunkook University. More frequent raids of sex trafficking businesses should also be conducted, he said.

In Korea, buying and selling sex is illegal, and pimping is, too. But the constitutionality of those laws are being challenged in the Constitutional Court, whose nine justices are expected to rule on the case by the end of this year. To declare the laws unconstitutional, at least six out of nine judges must rule to overturn it.