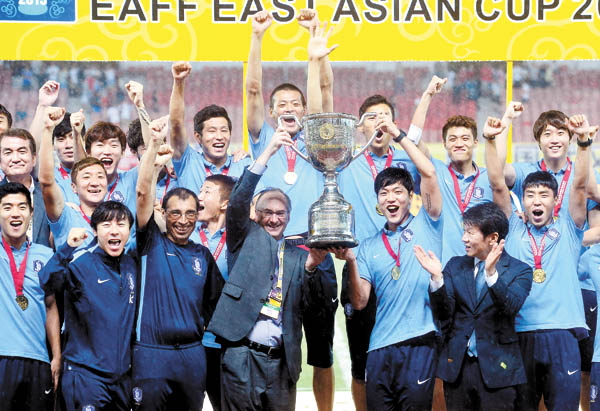 Uli Stielike, coach of Korea’s national football team, is a commander on the game’s battlefield and his “soldiers will die for him”.

The Korean men’s national football team returned on Monday after winning the EAFF East Asian Cup trophy for the first time in seven years. The Taegeuk Warriors topped the tournament with one win and two draws, edging host China, which had a win, a draw and a loss.

Stielike, who was appointed in September, coached the national team to beat China 2-0 and draw against Japan (1-1) and North Korea (0-0).

Yu, 63, a former major general in the Korean army, praised the coach’s ability in military terms. “If you compare Stielike to a commander in the army,” he said, “he has all the aspects of a courageous and virtuous general.”

Stielike now has 12 wins, three draws and three losses with Korea. Following his success in China, he is already looking forward to the 2018 FIFA World Cup Asian qualifiers.

“We will be better if we can get a little bit more cold-hearted and improve our [scoring] skills,” Stielike said. “If Europe-based players like Son Heung-min and Koo Ja-cheol join the team, we will be better.”

Stielike put out his youngest squad yet for the East Asian Cup games against China and North Korea. Against archrival Japan, he replaced nine regular players, which caused some concerns among fans, but his plan proved successful in the end.

Yu added that “when resting players, Stielike went into his room and focused on video analysis.”

In the locker room, Stielike motivates players before they go out on the game’s battlefield, Yu said. He emphasized the KFA’s tiger emblem on the national team uniform. “Before the kickoff, he told players that we should dominate and roar against our opponent like a tiger,” Yu said.

When the match starts, Stielike turns into a courageous coach, Yu said. He always stands on the sidelines regardless of the weather. In the East Asian Cup, Stielike’s shirt was covered with sweat because of the heat in Wuhan, China, and in the Asian Cup, he was soaked in rain, but he didn’t wear a raincoat or shelter in the dugout.

“In the Asian Cup, he got a cold because he got rained on too much,” Yu said. “Since he thinks coaching Korea is his last job, I can feel that he is devoting himself fully.”

Some fans think Stielike is like a typical cold German, but he is a grandfather with a warm heart, said Yu. During the East Asian Cup, the women’s team saw defender Shim Seo-yeon pulled from the tournament because of an injury from a match against China. Stielike sent a wreath of consolation from the men’s team.

In the East Asian Cup on Sunday, Stielike called a meeting of the squad during the halftime break of the China-Japan match. After South Korea drew 0-0 against North Korea earlier that day, Stielike’s side could only capture the trophy if Japan won or drew against China.

According to KFA officials, Stielike told players, “I don’t know whether we could win or finish runner-up in this tournament, but the result isn’t important. What’s important to me is that you guys gave your best effort, and I’m proud and thankful to you all.”

For Yu, former chief of the Korea Armed Forces Athletic Corps, the example Stielike displayed during the tournament reminds him of how a good commander in the military should be. “In the military, if a commander shows his sincere heart, soldiers respond to it with the same,” Yu said. “Stielike knows how to care for his players.”

The East Asian Cup trophy is also meaningful for Stielike because it is also his first major title since he began his coaching career.

The former Real Madrid player began coaching with the Swiss national team in 1989, but didn’t collect impressive titles. He won the league title with Qatari club Al-Sailiya in the 2011-2 season, but that was when the club was in the second division.

“The result of this tournament wasn’t made in just two weeks, but it is an effort that we have been putting on since October,” Stielike said on Monday at Incheon International Airport.

“When you win the trophy, it gives motivation and confidence to both players and coaches. Personally, I am very happy and honored about the win.”

Stielike said each player had maximized their skills. Defensive midfielder Jang Hyun-soo was named the tournament MVP, while Kim Young-gwon was named best defender of the tournament. The K-League-based players also raised their profile during this tournament.