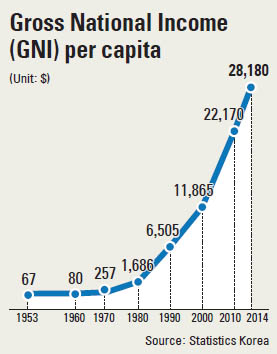 In the lead-up to the 70th anniversary of the end of World War II and Korea’s liberation from Japanese colonial rule, Statistics Korea released a special report Monday detailing the South’s dramatic economic growth, expanding more than 31,000 times in terms of gross domestic product and becoming the world’s 13th-largest economy.

It also detailed the flip side of the Miracle on the Han, including South Korea’s towering suicide rate - the highest in the developed world - and the rising tides of divorce and crime.

The nominal gross domestic product of Asia’s fourth-largest economy, which was one of the world’s poorest countries, stood at 1,485 trillion won ($1,277 billion) as of 2014, skyrocketing from 47.7 billion won in 1953, after the 1950-53 Korean War devastated the country.

According to World Bank data, there are only 15 countries in the world that record more than 1 trillion won in nominal GDP, and Korea ranked 13th. 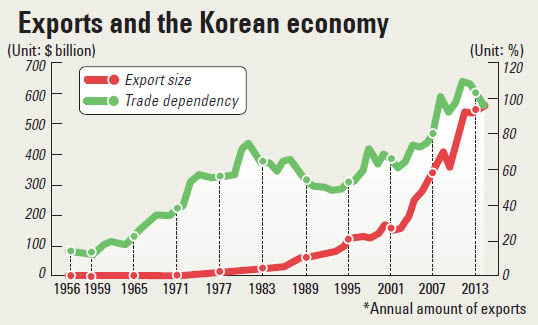 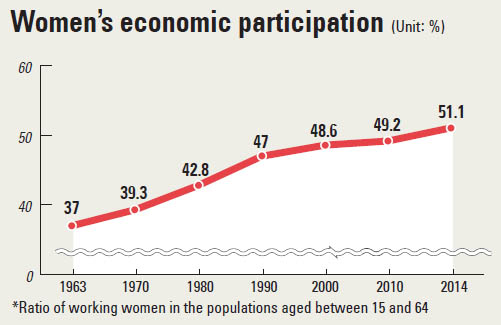 The core factor in Korea’s economic growth was exports, according to the statistics. Under the government’s export-driven economic policies of the 1970s and ’80s, Korea’s exports expanded from about $25 million in 1956 to $572 billion in 2014. The country became the world’s sixth-largest exporter and accounts for 3.1 percent of worldwide exports.

Accordingly, Korea’s dependence on trade has grown huge. In 1956, the ratio of exports, imports and all kinds of overseas income in the total GNI stood at only 15.2 percent. That figure grew to 99.5 percent as of 2014. 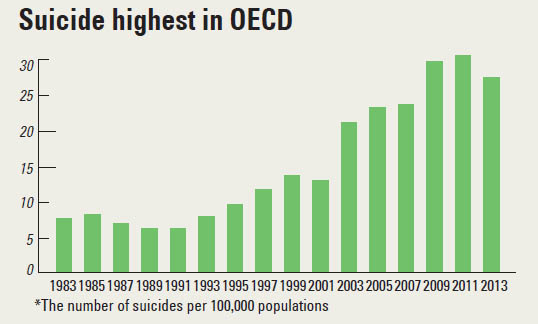 In the 1960s, the nation’s top export item was iron ore, but it moved into clothing and textiles during the ’70s and ’80s, and since 1992, semiconductors have been the top export item.

As a result, agriculture and fisheries accounted for only 2.3 percent of total industrial output in 2014, diminishing from 48.2 percent in 1953. 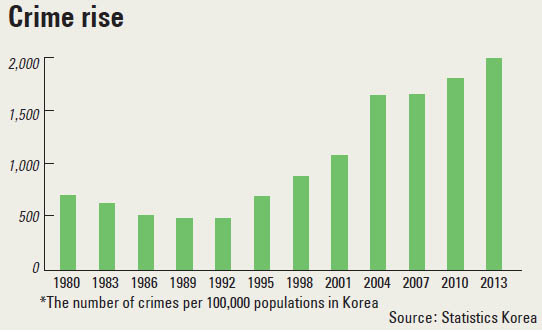 As of 2014, a number of Korea’s manufacturing industries ranked among the world’s top producers. Based on annual output, Korea’s automobile industry was the world’s fifth largest in 2014, shipping became the second largest in 2013 and steel ranked sixth in 2013.

In finance, Korea also improved its debt ratio and foreign exchange reserves. Debt in Korea’s manufacturing sector once reached its peak of 396.3 percent of total assets in 1997, when Korea was struggling with the Asian financial crisis, but it fell to 92 percent in 2013.

In the labor market, more Korean women are working. The ratio of working women out of the total “economically active” population between ages 15 and 64 rose to 51.1 percent in 2014, from 37 percent in 1963.

Working conditions in manufacturing also improved. Average working hours for the industry fell to 186.7 per month in 2014, from 232 hours in 1970.

Still, annual working hours for Korean workers stood at 2,071 hours on average, longer than in other developed countries, with 1,312 in Germany, 1,400 in France and 1,795 in the United States.

And despite economic growth, Korea has lagged in organized labor development.

In 1977, about a quarter of Korean companies had unions, but the rate dropped to merely 10 percent in 2013. That rate was below many developed countries, such as 91 percent in Sweden and even 16 percent in Japan and 13 percent in the United States.

More Koreans are also choosing to have smaller families, divorce or live alone from the start.

“The suicide rate started to surge after the 1997 Asian financial crisis,” said Jeong Jin-wook, an associate research fellow at the Korea Institute for Health and Social Affairs, by phone. “Suicides by elderly people living alone also rose, which is seen in other developed countries such as Japan.”