Song Seung-heon back in new drama

Song Seung-heon back in new drama 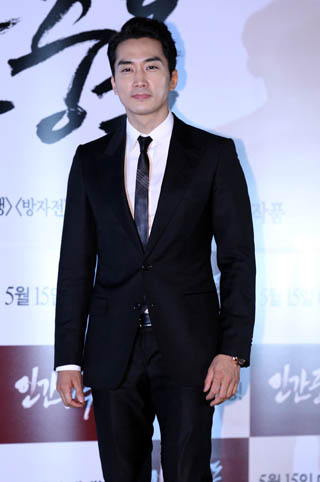 Actor Song Seung-heon will join actress Lee Young-ae in the historical drama “Saimdang, the Herstory,” according to the drama’s production company, Group 8, on Monday.

The story will revolve around one of the best-known female historical figures of her time, Shin Saimdang (Lee Young-ae), who was a calligrapher, painter and mother of scholar Yulgok during the Joseon Dynasty (1392-1910).

Song will take on a character named Lee Gyeom, who loves Shin for his entire life.

“Saimdang, the Herstory” will be different from usual historical dramas in that the main female character shuttles between the past and the present to show two women living in different ages.

The drama series is receiving much attention and high expectations because it is Song’s first TV drama in three years and the first in 11 years for Lee.

Meanwhile, the first shooting for the project took place on Monday, and the entire series is planned to be released in the early part of next year.