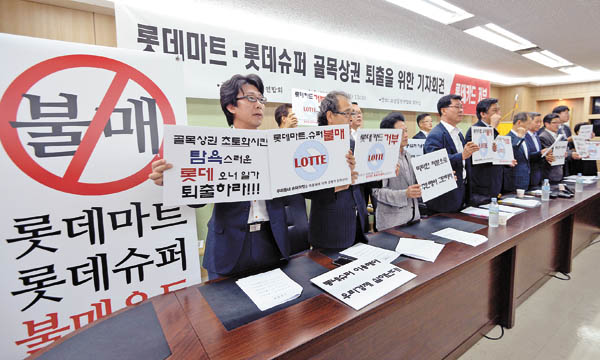 Members of small business merchants group promote a campaign boycotting the purchase of goods from Lotte retailers, including Lotte Mart and Lotte Super as well as Lotte Card during a press conference held in Yeouido, Seoul, on Monday. The boycott is in protest of the high-profile dispute between the founding family members. [NEWSIS]

Faced with the worsening corporate reputation over the ongoing family feud at Lotte, Shin Dong-bin, chairman of Lotte Group and co-CEO of Lotte Holdings, will apologize for the second time today in a bid to curb the growing criticism of the retail group.

He bowed in apology last Monday, at Gimpo International Airport when he returned from Japan, over the family’s public tug-of-war.

The second apology, scheduled at a press conference today, comes as various groups - including civic groups, consumer rights groups and an association of small merchants - staged boycott campaigns against the service and products of Lotte.

As the family dispute has taken its toll on the company, some family members have begun attempting to distance themselves from the high-profile squabble. 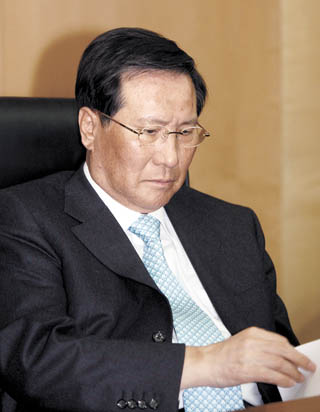 Shin Dong-in, nephew of founder Shin Kyuk-ho, said on Monday he will step down as CEO of Lotte’s baseball team, the Lotte Giants, to wipe out the “disgrace” levied against him.

“I decided to resign from the post at the end of this month to stave off disgrace and misconception,” the 69-year-old said in an interview with Yonhap News Agency.

Multiple local media outlets have reported the nephew sided with Dong-joo, the vanquished eldest son of the founder, against Dong-bin, chairman of Lotte Group and co-CEO of Lotte Holdings. Dong-in accompanied the founder during the patriarch’s visit to Japan last month.

The visit was intended as part of a plan to remove six board directors at Lotte Holdings including the second son Dong-bin, though the attempt failed.

The younger son fired back by demoting the founder to honorary chairman.

The relative stressed he holds a neutral position on the family conflict over management control.

“I was aware that [people] make a fuss if I go with the founder, but I couldn’t just ignore the founder’s request. But this shouldn’t be interpreted as pro or against Shin Dong-bin.”

He said he received a certain directive from the founder but did not carry it out. He declined to elaborate on the order.

He joined the management of Lotte in 1968 at Lotte Confectionery. He then moved to Lotte Engineering & Construction.

He later served as the CEO of Lotte Confectionery and Lotte Shopping until 2005.

He has not been in a top managerial position of Lotte’s key affiliates since he was appointed head of Lotte Giants in February, 2005.

Also accompanying the patriarch was Shin Young-ja, daughter of the founder. Media outlets also speculated the daughter supports the eldest son and founder but the eldest son later said she has not taken a side.

The father and sons now refrain from public attacks against each other amid public anger over the family feud.

But they continue to make discrete maneuvers in Korea and Japan to raise their clout at Lotte Holdings, a de facto holding company of Japan’s Lotte operations.

Dong-joo is seeking to regain the top seat for his father at the upcoming meeting of shareholders of Lotte Holdings.

He left for Japan last Friday where he dismissed Dong-bin on various media.

The younger son has strengthened his grip over Lotte Group. Over the weekend, he became the representative director of all subunits of L Investment, a Lotte unit that controls majority shares of various Lotte affiliates.

The son is now named along with the founder as the head of the unit.

While Dong-joo left for Japan, he undermined the younger son’s move.

“The founder was greatly angered,” he said. “We will respond with a lawsuit.”