Mood darkens for trade in China

Mood darkens for trade in China 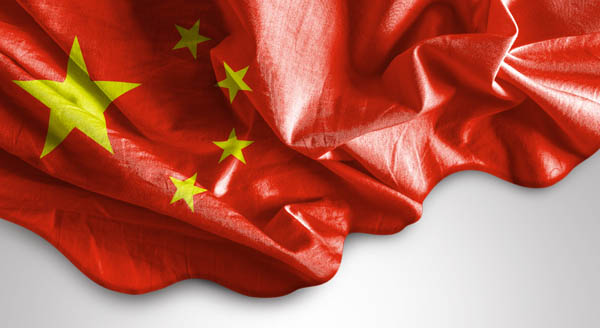 The business sentiment of Korean companies in China has worsened in the second quarter - particularly in the automotive and electronics sectors - mainly due to the slowdown in overall consumption in the Chinese market on the heels of a wobbling stock market.

It was the second straight quarter that the business sentiment index remained below the 100 mark.

According to a report by the Korea Institute for Industrial Economics and Trade (KIET) on Monday, the companies’ business survey index in the second quarter was 71, lower than 77 in the first quarter this year. 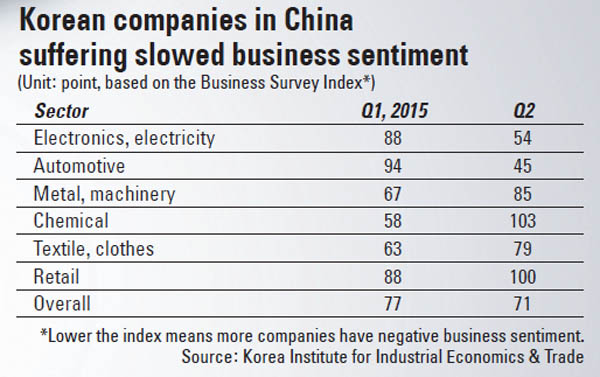 The survey was taken for a month from June 15, by the Korea Chamber of Commerce & Industry’s Beijing office and a Korean business association in China, on some 226 Korean companies operating in China. They were doing business in seven different sectors, ranging from electronics and automotive to chemical, textile and retail.

The slump in business sentiment was the largest in automotive and electronic devices, two industries in which Chinese rivals are quickly catching up on Korean technologies and in which consumer demands change quickly.

Korean auto companies in China gave 45 points in the second quarter, a lot lower than the 94 points in the first quarter, during which the Chinese auto taste has quickly moved to favor sports utility vehicles (SUVs) that are more affordable than Korean autos.

Only Korean chemical and retail industries expressed positive assessments regarding their businesses in the second quarter, each giving 103 points and 100 points, respectively.

Survey participants said the slowdown of demand in the Chinese domestic market was the main reason for their business hardships in the second quarter, followed by competition with Chinese rivals and elevated labor cost, which raised overall production costs.

In the first quarter, a steep increase in labor costs was the main reason Korean companies found it hard to do business in China, reflecting the slowdown in the growth of the domestic economy.

However, the Korea International Trade Association (KITA) rolled out a positive outlook on Monday that the Chinese economy will maintain its growth rate at the 7 percent range in the latter half of the year and Chinese investment is on its way to recovery thanks to state-led infrastructure building projects, which bring up both imports from other companies as well as local real estate transactions.

The outlook said Korea’s export to China and local production of Korean companies will stay contracted until the third-quarter due to the unstable Chinese stock market and contracted consumption sentiment.

The Chinese economy is forecast to rebound to last year’s level by the fourth quarter at the latest, the KITA outlook forecast, as the central government there is pushing policies to boost cash liquidity and the real estate market.