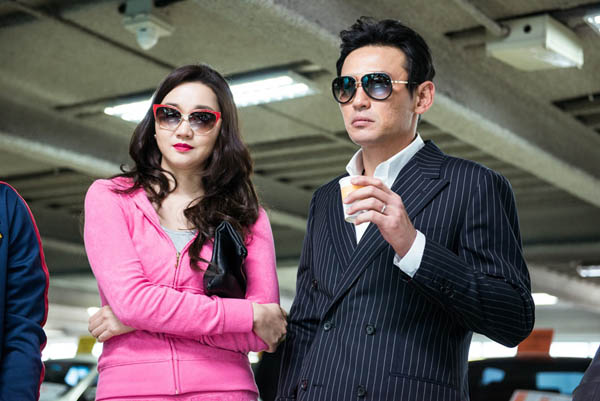 It’s a horse race at the Korean box office.

Following strong performances by local blockbuster “Assassination” and Hollywood action flick “Mission: Impossible ? Rogue Nation” for the past two weeks, “Veteran” was the new chart-topper for the second weekend of August.

Directed by action auteur Ryoo Seung-wan, the action comedy debuted with 1.9 million admissions at 1,064 screens nationwide, according to the Korean Film Council on Monday.

Although it came a little short of its competitors’ opening scores, (two million moviegoers for “Mission: Impossible ? Rogue Nation” and 2.4 million for “Assassination”), the film was still off to a good start, considering the fact that it opened at relatively fewer screens.

Featuring a slew of stars, including Hwang Jung-min, Oh Dal-su and Yoo Hae-jin, the film follows a confrontation between a hardheaded police officer (Hwang) and a haughty spoiled millionaire (Yoo Ah-in).

Last week, the movie was embroiled in a plagiarism scandal, with author Choi Jong-rim claiming that it resembles much of his 2002 novel “Korean Memories.” However, production company Caper Films refuted the claim outright, asserting that they will take “strong countermeasures” against defaming of the filmmakers. No further actions were taken by either side.

Tom Cruise’s “Mission: Impossible ? Rogue Nation,” the fifth installment of the mega franchise, slipped to third place, selling 942,014 tickets over the weekend. Since the film opened in Korea on July 30, it has made 37.6 billion won.

Far behind the top three were Universal’s “Minions” and Pixar’s “Inside Out,” in the fourth and fifth slots, respectively. “Minions,” in which miniature yellow creatures take center stage, sold 319,493 tickets, pulling its two-week total to 1.8 million, while “Inside Out,” which opened a month ago, has amassed 4.5 million tickets.

Wildlife documentary “Amazonia” opened in eighth place with 17,323 tickets sold, while “Diary of a Chambermaid,” the third film adaptation of the classic 1900 novel, took ninth place with 4,559 tickets sold.