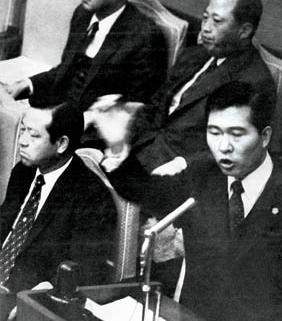 In early August 1973, as the Prime Minister, I was on a tour with the agriculture minister to look at farms in an effort to assess Korea’s dairy industry. On Aug. 8, while I was staying in Busan, Chief Secretary of Prime Minister’s Office Hwang In-seng called me and reported, “Kim Dae-jung was abducted by someone in Japan.”

After the declaration of the Yushin Constitution in October 1972, which gave President Park Chung Hee dictatorial powers, Kim Dae-jung was going back and forth between the United States and Japan to stage anti-Yushin events and he also established an anti-government organization called the Korea Democratic Unification Alliance (KDUA).

I was worried. If the Korean government kidnapped someone in Tokyo in broad daylight, the Japanese government wouldn’t tolerate it. It could have led to a severe diplomatic problem. 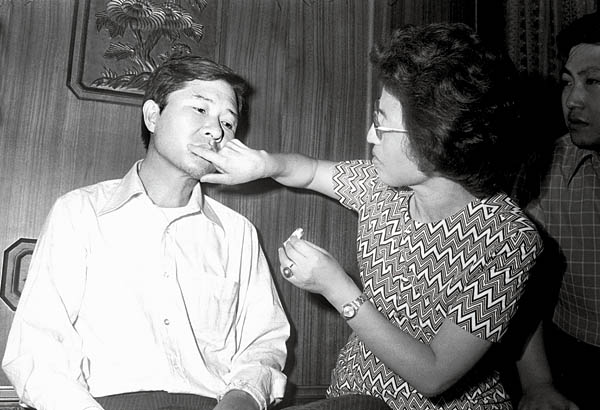 Lee Hee-ho applies medicine to her husband Kim Dae-jung, after he went missing for five days in August 1973, at their residence in Seoul.

While Kim was missing, I got another call on the night of Aug. 13, when I was resting at the Onyang Hot Spring Hotel after looking at farms in Seosan, South Chungcheong. It was Hwang once again, following the case and reporting to me time to time.

He said, “Kim Dae-jung, who’s been missing since Aug. 8, is now having a press conference at his residence in Donggyo-dong, Seoul.”

I cancelled all the appointments for the next day and went to Seoul to see the President.

“Didn’t you know about it?” he asked in a furious tone.

I absolutely didn’t know a thing.

“Can you believe that Lee Hu-rak [Director of the Korean Central Intelligence Agency (KCIA)] reported it to me after he brought Kim back to Seoul?” Park continued. “He did this without even talking to me.”

I was relieved that Park wasn’t involved in the kidnapping and Lee did it on his own.

It turned out Lee ordered Consul Kim Jae-kwon in Japan, who was dispatched by the KCIA, to abduct Kim Dae-jung. It was also rumored that Lee told him to throw Kim Dae-jung into the sea with a weight to make him sink, but the agents couldn’t do it. Kim Dae-jung recalled that a U.S. airplane hovered around the ship and protected him. But that’s not very convincing because it is very unlikely that an airplane could spot a 1,000-ton ship in the middle of the sea.

The abduction of Kim was reported the next day with domestic newspapers quoting the Japanese police. Japanese TV and radio channels competed to cover the case. The ruling and opposition parties in Korea released statements demanding the truth behind the case. In early October, university students started a movement to demand the government’s explanation and the dismantlement of the KCIA. It was the first crisis we faced since diplomatic relations with Japan were normalized in 1965.

I, the Prime Minister, had to step forward.

“The situation is so serious that I need to go to Tokyo and see the Japanese Prime Minister to give an apology,” I said.

KCIA Director Lee Hu-rak said, “You don’t need to go. It will subside if we leave it as it is.”

“You shut up,” I said. “How can you talk nonsense when you made the problem that I have to deal with?”

“You are right,” he said. “Go visit the Japanese Prime Minister.”

The following day, I visited the Blue House again to receive Park’s letter and then discussed measures at my residence with Lee, Foreign Minister Kim Yong-shik and Presidential Chief of Staff Kim Chung-yum.

“Since I’m going to Japan to deliver an apology,” I told Lee, “I need to know all about the case.”

Lee replied, “I don’t know much about it.”

I stood up and shouted: “Then who does know if you don’t? Don’t you realize I have to go to Japan for the thing you did?”

I got angry and tried to lunge at Lee.

Kim Chung-yum stopped me and I sat down.

It was three months after the abduction that I took off for Japan. On the plane, I couldn’t stop thinking about how to convey the apology. I didn’t want to act unmanly though I was going to have to apologize.

Arriving at Haneda Airport, a stewardess took my ashtray and said, “I’m emptying this for the fourth time now.”

I must have smoked throughout the flight and didn’t even realize it.

As I came down the stairs of the plane, Foreign Minister Masayoshi Ohira was waiting for me with two of his directors. I missed my footing on the last step and almost fell. If it wasn’t for Ohira, I would’ve fallen to the ground.

I knew Ohira from when we made the so-called “Kim-Ohira Memo” behind-the-scenes in 1962, which became a stepping stone for a Korea-Japan summit. He served as foreign minister under Prime Minister Hayato Ikeda in 1962 and was appointed again in 1972 by Kakuei Tanaka.

Ohira later told me, “It was apparent that you’ve worried a lot before coming to Japan.”

We moved to the Prime Minister’s residence in the afternoon. Prime Minister Tanaka came out and brought me into his office right away. It was a custom to take pictures before coming in, but Tanaka didn’t ask for it for me.

I offered an apology by saying, “We feel very regretful to the Japanese government and its people for the recent incident,” and suggested a few measures.

Tanaka said, “I highly appreciate the Korean Prime Minister came in person to express regret, promise to investigate the case thoroughly and prevent any more incidents. I guess that’s officially the end of the case.”

Tanaka added, “And please do not send someone like Kim Dae-jung again to Japan.”

He was very cool on the matter. Ohira intervened and said, “Hey, this isn’t right. You can’t talk like that just because you’re the Prime Minister. I have to explain at the Diet.”

Ohira had spent more times in the politics.

But Tanaka said, “It’s a done deal when the Prime Minister says it is. Don’t question it.”

Tanaka was a broad-minded man and we had something in common. He quit studying when he was in ninth grade. He had a small business in Daejeon while Korea was under Japanese colonial rule. After World War II, graduates of the University of Tokyo and Waseda University formed the mainstream of Japanese politics. Tanaka was an “Ima daiko,” a Japanese term for a high official from the bottom ranks. He must have thought that a mediocrity like me started a revolution and I assumed he liked me for that.

After the meeting, Tanaka said, “After a storm comes a calm. Let’s conclude the diplomatic problem here. I’ll send a letter to Park to reconfirm the friendship between the two countries, so let’s have dinner together.”

But I didn’t feel like having dinner with him. I said, “Thanks for the invitation but I need to take care of the staff at the South Korean embassy here, who are worrying so much about the incident.”

That was how we closed the abduction of Kim Dae-jung. At the end of 1973, Park held Lee responsible for the abduction and diplomatic problems and dismissed him as director of the KCIA.