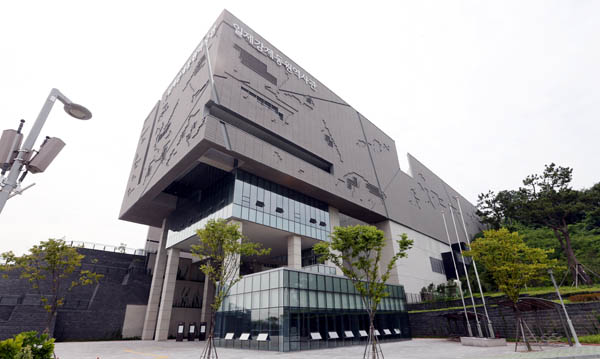 The tentatively named History Museum of Forced Labor Under Japanese Colonial Rule in Busan has not opened. By Song Bong-geun

When a memorial hall honoring Korean workers forced into labor under Japanese colonial rule was completed last year in the southern port city of Busan, the idea was to raise awareness of the island nation’s atrocities during World War II.

The seven-story establishment was going to run exhibits showcasing historical documents, newspapers, photos and accounts of how hundreds of thousands of Koreans were conscripted to fight as frontline solders, work in slave-labor conditions or serve as prostitutes in brothels operated by the Japanese military in the early 20th century.

Some 52.2 billion won (about $45 million) of tax money was earmarked to establish the tentatively named History Museum of Forced Labor Under Japanese Colonial Rule.

More than a year has passed since construction was completed, and yet its doors remain closed. Less than a week before Liberation Day, which falls on Saturday, a committee in charge of the museum’s management is at odds with the government on a system to name its board of members.

Failing to resolve the friction, the two sides have gone to court, and the official opening of the museum has been postponed. Every month, an extra 40 million won of taxes is spent for maintenance.

“Without finalizing the executive team, we can’t open the museum yet,” the committee said in a statement, adding that it hopes to open by the end of this year.

The Commission on Verification and Support for the Victims of Forced Mobilization under Japanese Colonialism in Korea, affiliated with the Prime Minister’s Office, took charge of preparation for the museum since March 2012, and formed a committee that would run management.

When the committee filed the case with the Seoul Administrative Court in February 2014, the legal authority ruled in favor of the organization, calling the ministry’s assertion to claim designative powers invalid.

The ministry filed an appeal to that verdict, and the two are now waiting for another ruling to be handed down next month.

Japanese construction company Mitsubishi Materials issued an apology to American POWs last month over its use of forced labor during World War II. An outside director of the company, however, wrote in the Japanese newspaper Sankei Shimbun that the Korean workers conscripted at the time were “highly different in nature” because Korea was colonized by Japan in the early 20th century, technically making them Japanese citizens.