Hongdae restricts the buskers that adore it

Hongdae restricts the buskers that adore it 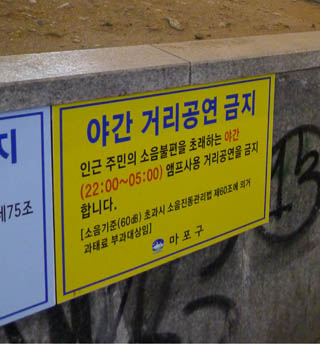 A notice from the Mapo District Office says nighttime street performance near Hongik University is restricted. By Kwon Hye-min

As a neighborhood known as a mecca for underground artists, Hongdae is where busking performances run around the clock and a rich cultural life attracts young people to come and play. Many singers thriving in the domestic music industry trace their roots to this area in northwestern Seoul, including singer-songwriter Hong Dae-kwang, who crooned for five years on the streets before landing on national television.

But some residents complain about the performances, labeling them “noise pollution.” They complain the music disturbs their everyday lives, and some shop owners aren’t crazy about them either.

In reaction, Mapo District announced last month that buskers will be prohibited from giving night performances on the so-called walking street, a main avenue stretching some 930 meters (0.6 miles) from the entrance of Hongik University. Anyone responsible for making a noise surpassing 60 decibels from 10 p.m. to 5 a.m. will be slapped with a fine.

The National Institute of Environmental Research identifies that level of sound as being similar to the inside of a department store, way quieter than the average busker. When a reporter from the JoongAng Ilbo, an affiliate of the Korea JoongAng Daily, visited late last month at around midnight, the measurements reached from 80 to 90 decibels, less like a department store and more like a rambunctious factory.

“The walking street in Hongdae is a residential area,” stressed Lee Gi-rak, head of the Mapo District environment department. “We received countless complaints from residents who say they can’t sleep with all the sound.” Police enforcement of the new ban has been low-key, but Lee said the district plans to tighten controls through night patrols.

Prohibiting night performances at one of the three hottest spots in the area is way too cruel, commented Yoon Jang-ho, a 19-year-old artist with an indie band called Crocodile Hip Hop Crew.

“There aren’t many residences near the [walking street] zone, and most shops close by 11 p.m.,12 a.m.,” he said. “Forcing us to ditch our amplifiers at prime time is suicidal.”

A 43-year-old shop owner surnamed Seo, however, welcomed the restriction. “The sound got to a point where I couldn’t hear what my customers were saying,” Seo said. “I wish musicians could entertain below a certain sound limit.”

Other cities around the country have implemented similar policies to combat noise pollution, including Haeundae District in the southern port city of Busan, which has run a busking registration system since August 2014. Only people who apply with the district prior to the performance are allowed to play in that specific time and place.

Jung District in Daegu has set a cap on the volume of sound performers can make and banned all gigs after 7 p.m.

“Many European countries run similar systems,” said Shin Dong-wu, a representative from an independent culture and arts group named Indie053, talking about the restrictions in Busan and Daegu. “When busking coexists with the local community, that’s when true art comes alive.”