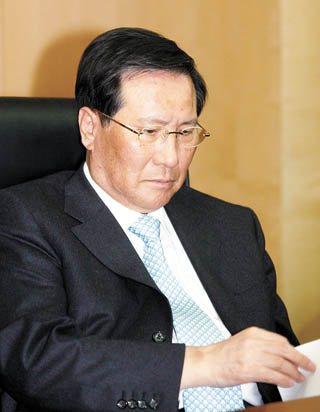 Will the family feud in Lotte Group also affect its baseball club, the Lotte Giants?

On Monday, Lotte Giants acting owner Shin Dong-in said he would resign from the post at the end of this month. Shin, 69, is the nephew of Lotte Group founder and general chairman Shin Kyuk-ho.

He has been seen as a supporter of Shin Dong-joo, the first son of Kyuk-ho, and in opposition to Dong-joo’s younger brother, Shin Dong-bin, in the recent battle for Lotte Group.

Shin Dong-in said in an interview with Yonhap News Agency that in order to avoid “misunderstanding and dishonor,” he will quit the job. The Lotte Giants, however, said they have yet to hear anything from the acting president about his resignation.

Officially, the owner of the Giants is Shin Kyuk-ho. However, the 92-year-old has not played an active role in the club’s management since 2005, when Dong-in stepped in with the title of “acting owner.”

Shin Dong-in was considered Lotte Group’s second most powerful man in the 1990s, as CEO of Lotte Confectionary and Lotte Shopping. However, since Dong-bin started to take important roles in the group from the early 2000s, Dong-in seemed to be fading away. Becoming the acting owner of the baseball club was considered to be an honorary position rather than one that held much influence.

Although the fraternal feud between the two Lotte Group heirs is ongoing, sports pundits predict that the Giants will see a change of management style if Dong-bin’s side takes over the Busan-based club.

According to a person close to Dong-bin, the current chairman of Lotte Group, the 60-year-old has big ambitions for running the sports club.

“When Shin Dong-bin visited the United States in the past, he was impressed when people there respected him for being an owner of a sports club,” a Lotte Group official said on the condition of anonymity.

Since 1995, Dong-bin has been acting owner of the Chiba Lotte Marines, the Japanese club in Nippon Professional Baseball (NPB). He has invested heavily in the club, improving its facilities and giving manager Bobby Valentine a five-year, 2 billion-yen ($16 million) contract. The big spending caused a massive deficit for the club, and even his father reportedly told him to be more conservative.

Dong-in’s style of management has been the opposite, with Giants officials saying his frugality has helped improve the club’s financial situation.

Since 2008, the Giants have marked net profits in their financial statements, though the club was in the red the last two seasons. In 2012, the Giants reported a net profit of 9.5 billion won ($8.1 million).

Dong-in has been conservative with spending, but not with his directions; he is known for interfering with the team’s plans on the ground. He has reportedly scolded managers for their game plans and coaching styles, and was even seen scolding players in the minor league.

When Chang Byung-soo became president of the Giants in 2010, sports pundits saw the appointment as a way to contain and check Dong-in.

According to the Giants, Dong-in has not been active in the club since the infamous CCTV incident last year. The Giants took heavy fire after high-ranking club officials allegedly spied on their players by reviewing closed-circuit television footage at hotels. The incident caused then-president Choi Ha-jin and other managers to resign from their posts.

The Giants this year announced intentions to start fresh after the incident and repair their image. However, the turmoil within Lotte Group is now starting to shake the team. The Giants currently sit eighth among 10 clubs in the Korea Baseball Organization.

“We are trying to focus only on the game, but since this situation is unprecedented, it’s hard to ignore,” said a Giants pitcher who asked not to be named.