Park relishes the birth of his new lifestyle

Park relishes the birth of his new lifestyle 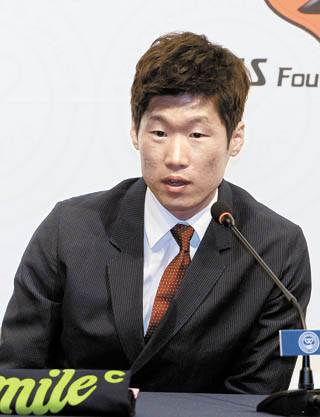 Park Ji-sung speaks during the FC Smile foundation ceremony at the Kim Koo Museum in Seoul on Monday. [NEWSIS]

It has been about 16 months since Park Ji-sung quit playing football, but the former Manchester United midfielder is keeping busy off the field.

Park, 34, is currently the president of his JS Foundation as well as the Manchester United club ambassador. Last month, he was appointed to the Social Responsibility Committee of the Asian Football Confederation.

But Park, who is the first Korean to play in the English Premier League with Manchester United, from 2005 to 2012, will soon add another role that will take up more of his time. In November, he will become a father.

Park tied the knot with former SBS announcer Kim Min-ji last July. The former Korea national team captain has already given his child the nickname “Mandoo” (Korean dumpling), which was also his wife’s nickname when she was young.

Park - who has been living in London since he retired in May 14, 2014 - was in Pyeongchang, Gangwon, last week, the host city of the 2018 Winter Games, for the youth football tournament that his JS Foundation is hosting. This week, he was also in Seoul, where he joined nonprofit medical service organization Operation Smile to create a charity football club called FC Smile.

Park, who also played with PSV Eindhoven (2002-05, 2013-14) and Queens Park Rangers (2012-13), welcomed players in the JS Dream Cup with Nexon at the banquet. Ilgan Sports, an affiliate of the Korea Joong
Ang Daily, met with Park on Saturday to discuss his changing life.

Q. You are going to be a father in November. Is it a boy or a girl?

A. Since you had a long trip here, I should answer that question, right? I can tell you my baby is not a boy (laughs).

How did you feel when you first saw the baby through ultrasound scan and heard the heartbeat?

It was really amazing. I once thought, ‘Can my wife and I hold hands together and go to the hospital without people noticing?’ That’s a normal scene for couples, but it was something I couldn’t do. For me, ordinary things are important. I think living an ordinary life will bring stability for my wife and baby. I’m satisfied with the life I’m living right now.

Are you afraid of being a father?

Honestly, I’m a little afraid. But at the same time, I think I should be more responsible and be an example to others. I think being a father motivates me to become a better person.

It’s been about 16 months since you retired. Do you still have a disciplined life?

(Laughs). My biggest escape from my life would be breaking away from my daily routine. When I was a player, all things were scheduled … I had to wake up at a certain time and go to the training center and sleep early when there’s a match the next day. The fixed daily routine helped me keep up my condition. But now, I’m not thinking about it. I also sometimes drink wine in evening, which was something I couldn’t imagine when I was a player. These are just little things, but it’s all special to me.

What about your work on the AFC’s Social Responsibility Committee?

It’s an important start for studying administration. In Europe, I know a lot of players are working under the UEFA. In a football sense, you can say a game-starting whistle has blown for my career as an administrator (laughs).

Why are you so busy even after retirement?

I wanted to take a rest after retirement, but I just can’t. I travel a lot more than when I was a player and adjusting to jet lag is still difficult. But through various activities, I can now see clearly what I should do. I want to do something that can impact not only Korean football, but also Asian football and the sport itself.

In June, you played at Old Trafford for the first time in nearly three years in a charity match between Manchester United and Bayern Munich. How was that?

It was a special experience. I was among the youngest participants, so they told me they were relying on me (laughs). Mark van Bommel even joked that I should return to the pitch again. As I wore Manchester United’s uniform again in front of a crowd of 50,000, it reminded me of many memories and I even thought of returning to the field (laughs).

It’s been 10 years since you first joined Manchester United. How does that feel?

Time really goes fast. I’m really thankful that I experienced the best moments as a footballer with the team. I think I made the right decision [summer 2005] to join Manchester United.

There was speculation that Korean footballers will have a hard time going to the EPL because of the difficulty in getting a work permit in England. What do you think?

It became difficult, but good players can still go there anyway. It’s difficult to go directly [from Korea] to the EPL, but there is still a way. You can still get recognition by playing in other leagues. The changed system doesn’t block talented players going to England. Just like me or Lee Young-pyo [both went to the EPL from the Dutch league] and Seol Ki-hyeon [who went to the EPL from Belgium] did in the past, I think players who build their career step by step may get a better opportunity.

Have you seen the EAFF East Asian Cup matches?

I haven’t watched it, but I’m following news articles. It’s positive that new players are showing good performances steadily, and game results are also not bad. It’s also hopeful that now players can get motivated by knowing they can be a regular member in the national team if they put their best effort forward. I think when those who played well in the East Asian Cup and players based in Europe get along well, the national team will create synergy. The team will do fine in the FIFA World Cup qualifiers.

Some fans say that Jeonbuk Hyundai midfielder Lee Jae-sung is a player who combines the skills of you and winger Lee Chung-yong. What do you think?

I haven’t seen him play, but I did hear about him. It looks like we would have a great player (laughs). And he is still young. I think he has potential that can draw attention from fans. What’s important is when and what league he goes to and how much he can grow.