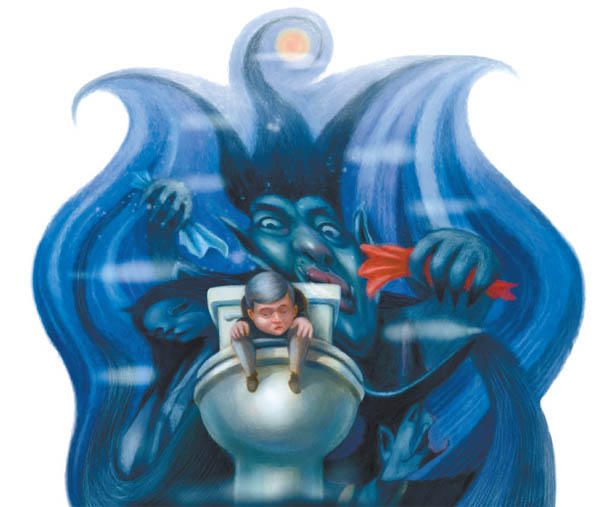 One popular urban legend sparked widespread panic in the 1990s.

While undergoing plastic surgery, a woman’s lips became disfigured, the story goes. Upon seeing her ruined face, she was so shocked that she went insane, some say, or committed suicide, as others told it. Either way, she would then appear on dim street corners at night, wearing a white coat and a red mask.

To any unfortunate passersby she would ask, “Am I pretty?” while lifting the red mask. If the person answered yes, she would remove a sickle from her coat and slash the person’s lips, just like hers.

If they answered no, the price was much higher: death. But one couldn’t count being able to run away, since she could run 100 meters (328 feet) in just 10 seconds.

As the popular story spread across the nation, the masked woman became the subject of fear, especially among children, who hurried each day to get home before dark.

Such spooky stories have always existed. In fact, some horror stories have been passed down through the ages, with the details changing and evolving to fit with the times.

According to the author of the book “The Vanishing Hitchhiker,” Jan Harold Brunvand, a professor emeritus at the University of Utah, there are several requirements for a good urban legend.

First of all, the story needs to be simple but shocking enough to appeal to the public. Second, the story should make people believe it is based on a true incident. Also, the tale should deliver a meaningful message.

Based on these elements, it’s clear that the most popular scary stories best represent the widespread beliefs and feelings of society during a specific period of time.

Neuropsychiatrist Lee Na-mi asserted that “when people feel insecure, they tend to come up with the cause of their fear in order to solve the problem.”

“Consequently, they create and even look for horror stories, even if the tales can’t be scientifically proven,” she added.

The story revolving around the woman in the red mask, for example, portrays an important social issue of the ’90s. During that time, there were many instances of violence and abduction targeting teenagers. And the tale was apparently spread by parents to make their children hurry home after school, to avoid becoming victims of such crimes.

According to Chung-Ang University Prof. Kim Jong-dae, who has also been collecting spooky stories from across Korea over the past 10 years, “in order for urban legends to be created, there needs to be a lot of people [in a city], and those people need to be a little bored.”

In Korea, such tales existed even during the Japanese colonial period (1910-45). In Gyeongseong (the city now known as Seoul) in the 1920s, for instance, there was a story of a woman who killed herself after being abandoned by the man she was set to marry. What seemed to be a commonplace story from that time became a horror story when the woman’s corpse didn’t decompose for nearly a month.

The woman’s parents apparently asked several men to stay in a room with the corpse for a few days in return for rice, in order to relieve their daughter’s grief from having died a virgin. As the rumor quickly spread, a newspaper reporter actually attempted to report on the case but he couldn’t track down any evidence of the incident.

In the early 20th century, when women’s moral virginity was emphasized, various tales involving women abandoned by their lovers began to emerge. In fact, this was the most common theme of urban legends during that time.

But in the modern era after Korea underwent urbanization, the focus of such stories changed, and they began to be set in closed, urban spaces, such as schools. Various rumors spread through elementary schools, such as word of a statue suddenly moving at night or music emanating from an empty classroom.

More frightening tales emerged from middle schools and high schools, such as the story of the “tongtong ghost.” Tongtong is a Korean onomatopoeia for the sound of a bouncing object.

The story begins with the No. 2 student in the school being jealous of the top student, so he pushes his rival off the roof of the school. The No. 1 student falls and dies after his head hits the ground. One day after the incident, the jealous student was studying at school late at night and alone, when he suddenly heard an unknown voice.

Feeling scared, the student hid under a desk, but the voice only came closer, saying, “Tongtong, there you are!”

It turned out that the murdered student, whose head had hit the ground, had turned into a ghost with a head that bounced on the floor.

Such a story directly reflects the psychological stress that many Korean students face while competing for university acceptance at the expense of their close friendships, according to Kim.

In the ’90s, when former President Roh Tae-woo proclaimed a “War on Crime,” human trafficking stories started becoming prevalent. One of the most well-known examples is “Grandma on a Bus.”

In this story, an old woman purposefully provokes a quarrel with a girl on a bus to make her get off the vehicle. When the two get off, a group of people waiting nearby in a van rush in to kidnap the girl and sell her off.

In addition, as the number of people traveling abroad increased, horror stories set in foreign countries began to appear. One of these tales centered on a newly wed couple who went abroad for their honeymoon, only to have their arms and legs cut off before being sold to a circus troupe.

The country where this incident took place changed based on mass media coverage and the country’s social issues at the time.

Song Jun, who runs a website called “Strange Stories at Sleepless Night” focused on horror stories, said, “There are different types of horror stories that come out at specific periods of time.”

“In the past, most of them revolved around ghosts, who were the main subjects of public fear. However, the subjects of those stories are being replaced by humans.”

For instance, in the past if a scary story took place inside an elevator, the story would involve a person getting stuck in the elevator with a ghost. However, contemporary horror stories set in an elevator would instead feature a person stuck in the closed space with a serial killer.

“These kinds of tales could be heard a lot more frequently when the nation was all in fear of well-known serial killers such as Yoo Young-chul and Kang Ho-soon,” said Song, noting the current mass psychology that people are scarier than ghosts.

Consequently, urban legends in recent times focus on interpersonal relationships. An interesting tale that revolves around people instead of supernatural forces is the story that deals with the relationship between a daughter-in-law and her father-in-law.

There was a daughter-in-law who lived with her father-in-law. She put a lot of effort into preparing meals for him every day, but he only complained, saying that her cooking was not as good as his late wife’s. After awhile, the daughter-in-law became angry, adding a little bit of pesticide to his soup.

In response, her father-in-law unexpectedly cried out and said, “This is the taste I was looking for. It tastes exactly like the food my wife used to cook for me.”

These types of stories have been repeated and passed down, changing with the times. However, many experts agree that nowadays, there aren’t many proper horror stories in circulation.

According to Professor Kim, the reason for the dearth of urban legends these days is that “people started having access to a myriad of horrible stories through mass media, and they have realized that what’s more dreadful than any horror story is reality.”

“Consequently, people have come to realize that there is no need to create horror stories, not to mention being too busy to create them.”

Japan, the source of scary stories

Many urban legends popular in Korea, such as the tale of the woman in the red mask, actually originated in Japan.

That chilling story, of a woman whose lips were disfigured during plastic surgery and who consequently became a murderous ghost, is known to have originated in the Japanese city of Gifu in 1978.

Another popular genre of scary stories involves the toilet.

“Do you need red toilet paper or blue?” whispered a ghost in a dark toilet.

This famous horror story that spread across Korea in the early 2000s actually came from its neighbor to the east.

In the past, toilets in Japan were usually built above flowing water, leading to legends of creatures who bothered the poor souls using the toilet. On the other hand, Korean people usually did their business on land, an environment not as conducive to scary stories.

Various spooky stories involving schools that were built on top of cemeteries also came from Japan. In that country, tombs are usually spread throughout the towns, so it is common to have to move graves before constructing buildings. In Korea, however, it was very rare to place a graveyard near a village, making such stories culturally unfit for Korea.

But such Japanese stories are known to have begun spreading across Korea in the time of enlightenment, at the end of the 19th century.

According Chung-Ang University’s Prof. Kim Jong-dae, “Japanese people had a tradition of gathering with their neighbors once a year to share a hundred horror stories while only using candles for a source of light.”

“As a result, many spooky tales have developed from the country.”

In fact, popular animation series such as “Pocket Monster” and “Digimon” are the result of this culture.